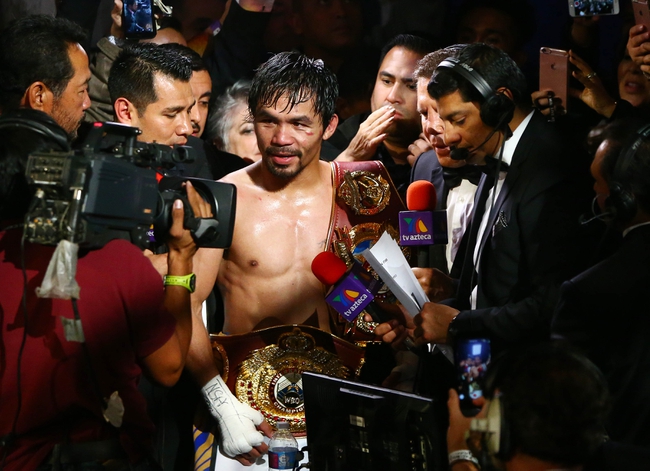 Manny Pacquiao enters this fight with a 59-7-2 record that includes 38 knockouts. Pacquiao has won five of his last seven fights, and he’s coming off a July loss to Jeff Horn. Pacquiao is coming off a loss in which most knowledgeable boxing fans say he was robbed by bias judges. Against Horn, Pacquiao landed double the amount of punches and at a much higher percentage and still lost. Pacquiao is now 39 years old, stands at 5’5” and has a 67 inch reach. Pacquiao will also enter the ring this time without longtime trainer Freddie Roach, as he’s been replaced by longtime friend Buboy Fernandez. As for his current skill set, Pacquiao still has the heart of a warrior and is well conditioned for a guy his age. The athleticism, quickness and power has dropped a few pegs, but Pacquiao still has the movement, high work rate and the boxing IQ to get the job done. Pacquiao threw 573 punches in his last fight and landed 32 percent of them, so the hand speed and aggressiveness is still there and should be respected. However, it goes without saying that Pacquiao is no longer the elite fighter he once was even just a few years ago.

Lucas Matthysse enters this fight with a 39-4 record that includes 36 knockouts. Matthysse has won five of his last six fights, and he’s coming off a January win over Tewa Kiram. Matthysse is another fighter who is getting up there in age, but he’s fighting for the third time since May of last year and will defend his new belt for the first time. Matthysse is 35 years old, stands at 5’6” and has a 69 inch reach. Matthysse is known for his aggressive, come forward style, who throws violent punches and has one-punch knockout potential. In fact, 15 of Matthysse’s last 16 victories have ended in stoppage, and that includes knocking out one of the better boxers in Thailand in the eighth round a couple months ago. Matthysse doesn’t have the hand speed or the movement he may have had when he was younger, but power is usually the last thing to go with quality fighters, and the Argentinian has proven times and time again he still has serious pop when landed cleanly.

This is close to a toss-up fight for me, as both guys are clearly past their prime and we know to expect the unexpected when guys no longer have their pure skill sets. Matthysse is the much stronger puncher, and that’s scary given that it will take just one punch to end this thing. However, Pacquiao still has above average movement, and that’s key given that he can control the ring, and pick his spots while dodging Matthysse’s best shots. Matthysse has also lost two of his last four fights that have seen at least the 10th round, which is a clear sign fatigue sets in and he’s no longer effective in later rounds. Pacquiao is also still able to take a punch and has that warrior mentality that can be the deciding factor in the last few rounds with the fight on the line.

You have to question Pacquiao’s motivation at this point and if he’s simply searching for cash grabs, but this is a favorable fight for him and he should be able to win due to his movement.