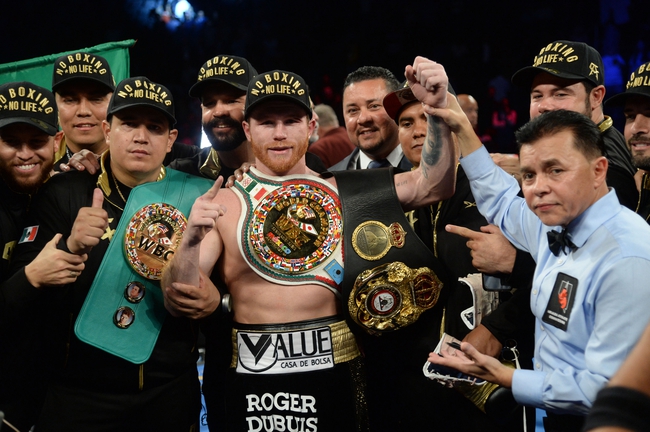 Canelo Alvarez enters this fight with a 50-1-2 record that includes 34 knockouts. Alvarez has won eight of his last nine fights, and he’s coming off a September victory over Gennady Golovkin. Alvarez is coming off another controversial decision, as he landed fewer punches than GGG, but he was more accurate with his selection and far more aggressive than the previous bout. I personally gave the fight to Golovkin, but there’s no doubt Alvarez stepped up in the rematch and proved he’s possibly the best boxer on the planet. Alvarez will now take his second fight of the year for the 15th straight year since turning pro in late 2005. Alvarez is 28 years old, stands at 5’9”, has a 70 inch reach and an orthodox stance. Alvarez is known for his extreme punching power and has produced knockouts in eight of his last 14 victories. Alvarez’s overall offensive ability is elite, as he’s one of the best combination punchers in the sport, and he has a proven chin and is sharp defensively to go along with it. Alvarez does a nice job of bobbing and weaving punches without giving up much position and has a proven chin. When aggressive, Alvarez is one of the most polished and fun to watch boxers in the sport. It’s just a matter of Alvarez bringing the fight to his opponent. This will be Alvarez’s first career fight in New York.

Rocky Fielding enters this fight with a 27-1 record that includes 15 knockouts. Fielding has won each of his last six fights, and he’s coming off an July win over Tyron Zeuge. Fielding is fighting for the third time this year and will be defending his belt that he just earned with a fifth round knockout. Fielding is a respectable boxer from the UK, who has been in the ring with Callum Smith and has a victory over John Ryder. Fielding is 31 years old, stands at 6’1”, has a 75-inch reach and has an orthodox stance. Fielding isn’t exactly known for having a ton of punching power despite three of his last five wins coming by knockout. Fielding does a good job of using his length, as he mixes in combinations at times and really enjoys attacking the body. Fielding throws a lot of hooks to the body and it’s where majority of his damage has been done over his career. The problem with Fielding is that he hasn’t been in the ring with a lot of quality fighters, and he’s a bit on the slow side. We’re going to obviously learn a lot about Fielding in this fight, win or lose, as this is a massive jump up in competition. This will be Fielding’s first career fight in the United States.

Fielding has a massive size advantage over Canelo, which presents its challenges and opens up angles and possible countering situations. The problem is that’s just about the only thing Fielding has going for him in this bout. The main concern I have with Fielding is that he’s slow. It takes him a long time to load up a punch and the lack of hand speed will be exposed against a top tier boxer. Canelo will pick Fielding apart and can probably call which round he wins this fight in. It’s really that simple, as this is a stay busy fight for Canelo to keep him fresh heading into the new year.

Canelo wins this fight by knockout, which pays at -400, much better odds than picking him to win the fight outright. I’ll also predict a fifth round knockout at +750 odds.