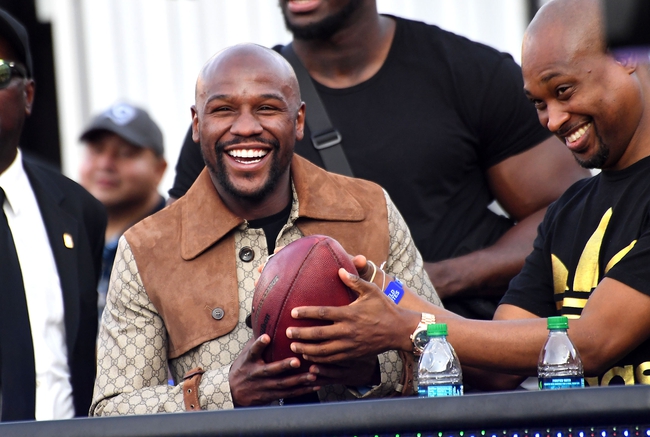 Floyd Mayweather enters this fight with a 50-0 boxing record that includes 27 knockouts. Mayweather has fought three times since 2015 and is coming off a 2017 knockout win over Conor McGregor. Mayweather has announced several times throughout his career that he’s retired and not looking to fight, but we all know he’s about his money and is more than willing to take these questionable fights if the cash is right. Mayweather had no real business getting in the ring with an MMA fighter in McGregor, and he certainly shouldn’t be fighting Nasukawa, especially when there’s respectable real boxers on the table. Nevertheless, here we are. Mayweather’s skill set doesn’t need a complete breakdown, as he’s arguably the best defensive boxer in history and has extreme quickness and head movement. Mayweather almost never gives his opponent a chance to land a clean shot, and even at almost 42 years old, he still has the hand speed to counter when the chances open up. Mayweather is one of the most accurate boxers you’ll find and his IQ is off the charts. The only thing going against Mayweather is that he is old and hasn’t been in the ring often, and there’s a long history of boxers going out in ugly fashion when they hold on too long. This will be Mayweather’s first career fight outside of the United States.

Tenshin Nasukawa may only be 20 years old, but he produced 100 kickboxing fights under this belt by the time he turned 18, and he finished with an amateur record of 99-5. Nasukawa has a background in Muay Thai where he trained in Thailand and did score a knockout victory over Amnat Ruenroeng, who was a IBF flyweight champion a few years ago. From limited film, Nasukawa is a disciplined, aggressive fighter and has enough power in his hands to where he can do some damage. Nasukawa is a creative striker and quite athletic, which has made him deadly with his legs over his career. There’s no question Nasukawa is a talented fighter and highly impressive with his legs, especially for his young age. However, you have to question just how effective Nasukawa can be in a pure boxing match where legs aren’t allowed. Nasukawa relies heavily on his legs, knees and athleticism, and most of that is out of the question when simply boxing. Regardless of the result, we’re going to learn more about Nasukawa’s hands once this fight takes place.

This is a weird, weird fight. One minute the fight isn’t happening, the next minute it is. Rumors were that it would be an MMA or at least kickboxing fight, now there’s reports that kicks aren’t allowed. However you want to slice it, this is a joke of a fight. If Mayweather wants to fight, he should be in the boxing ring against somebody who earned their stripes. When you factor in that kicks aren’t allowed and this is pretty much just a boxing match, you have to side with Mayweather.

Mayweather has zero chance to win this fight if any form of MMA was allowed, as you don’t pick that stuff up part time while driving around in fancy cars. Nasukawa would drop Mayweather with one round house kick and it would be over. However, assuming it’s just a boxing match, and Nasukawa has limited experience in pure boxing, I’m going to back one of the best to ever do it.

The pick in this article is the opinion of the writer, not a Sports Chat Place site consensus.
Previous Pick
Josh Warrington vs. Carl Frampton Boxing Preview, Pick, Odds, Prediction - 12/22/18
Next Pick
Power Ranking Top-10 Pound-For-Pound Boxers Heading Into 2019