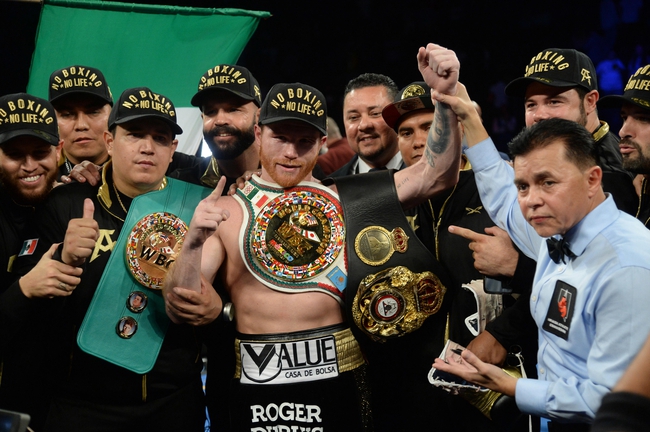 Considering I cover every relevant boxing match, it’s only right to put together the top-10 pound-for-pound boxers as we head into 2019. Throw out the weight classes, just give me the best 10 boxers in the world right now. Only things I’m focusing on are ability and resumes, and obviously these things can change quickly, and they likely will with some of the matches that are being scheduled already.

Here are the top 10 pound for pound boxers in the world heading into 2019.

1. Terence Crawford - Terence Crawford was my top boxer heading into 2018, and he put together knockout victories over Joe Horn and Jose Benavidez Jr. to solidify that ranking. Crawford is the complete package and one of a few boxers who has yet to show a clear weakness, despite being 31 years old and having 189 rounds under his belt.

2. Vasiliy Lomachenko - Vasiliy Lomachenko should have little trouble with Jose Pedraza in New York, making for five victories since April of 2017. I’d like to see Lomachenko step up in competition this upcoming year, but his skill set, resume and amateur career puts him in a class by himself.

3. Canelo Alvarez - Canelo Alvarez puts himself back in the conversation as the best in the world after surviving two close fights against Gennady Golovkin. Regardless of what your card looked like, Alvarez traded 24 rounds with GGG, something few guys in this sport can do. Alvarez is only 28 years old and has a godly resume. Assuming he stays healthy, Canelo will be in the convo for best all time once his career is finished.

4. Errol Spence Jr - Errol Spence Jr is probably my favorite boxer to watch, so this ranking may have some bias to it. However, Spence had a solid 2018 with finishes against Lamont Peterson and Carlos Ocampo, and he has a date scheduled with Mikey Garcia. Spence and those body shots are no joke. Sleep on the kid if you want.

5. Mikey Garcia - Mikey Garcia performed two boxing clinics in 2018 against Robert Easter Jr and Sergey Lipinets, and he’ll have a chance to gain even more respect in a few months against Spence. One of the smarter boxers in the world, Garcia doesn’t beat himself and will pick you apart if you allow him to get comfortable. Garcia is big time and it’s nice to see him get these big bouts to increase his popularity.

6. Gennady Golovkin - Gennady Golovkin is getting up there in age and honestly hasn’t looked great in his last few fights. Still, Golovkin should have enough left in the tank to give us a few more big bouts and the power is still there for an exciting finish. However, it won’t be long before GGG starts to fall down the totem pole.

7. Oleksandr Usyk - Oleksandr Usyk moves onto the list after victories over Mairis Briedis, Murat Gassiev and Tony Bellow, one of the more impressive 2018 for any boxer. Usyk steadily has gotten better even as the competition has improved. It will be interesting to see what Usyk has in store this year after probably his most successful year to date.

8. Naoya Inoue - Naoya Inoue isn’t a household name yet in the United States due to all but one of his fights taking place in Japan, but the 25-year-old “Monster” is the complete package in the bantamweight division. With a ridiculous combination of speed and power, Inoue is the type of boxer who can drop his opponent with one clean body shot with either hand. The sky is the limit for Inoue, especially if he moves up a weight class and starts getting bigger fights. Youtube Inoue if you haven’t already. You’re welcome.

9. Anthony Joshua - Anthony Joshua looked shaky at times in both of his fights against Joseph Parker and Alexander Povetkin, but it was nice to see him dig deep and do what it takes to win. Adversity is good for the young best heavyweight in the sport. Now if only Joshua would fight Wilder and put an end to the nonsense. Spoiler: Joshua will eat Wilder’s lunch.

10. Tyson Fury - Tyson Fury deserves some love after the personal battles he had with depression, drug use and weight gain. Fury won two fights in 2018 and outboxed Deontay Wilder for the majority of 12 rounds and would have earned an easy victory if he wasn’t knocked down twice. Fury showed he’s still capable of boxing at a very high level and at just 30 years old, that’s exciting for the heavyweight division.