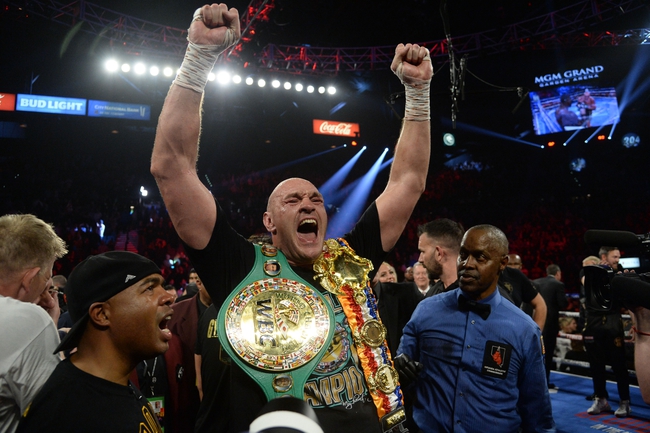 Deontay Wilder enters this fight with a 42-1-1 record that includes 41 knockouts. Wilder has won five of his last seven fights, and he’s coming off a February loss to Fury. Wilder is coming off his worst showing of his career where he looked sluggish out of the gate, didn’t have his leg and was knocked out in the seventh round. Wilder blames the costume he wore coming out to the ring for the dead legs, but I believe it had more to do with the shot to the ear that caused bleeding and his equilibrium being messed up. Wilder’s stock took a major hit in his last bout and it’s crucial he bounces back here to remain in the best heavyweight conversation. Wilder is a 34-year-old American who stands at 6’7”, has an 83-inch reach and an orthodox stance. Despite his last performance, Wilder is still the most powerful puncher in boxing and can change things with just one shot. We saw it in the first bout between Wilder and Fury, and we saw it when he was in trouble against Luis Ortiz. Wilder doesn’t have great footwork, his technique is all over the place and he can even struggle to throw a proper jab to set up the rest of his punches. From a pure boxing standup, Wilder isn’t all that great and can be broken down by above-average boxers. However, Wilder and that punching power is the ultimate equalizer and it makes it really tough to bet against him when he needs to land just one shot. This will be Wilder’s sixth career fight in Las Vegas.

Tyson Fury enters this fight with a 30-0-1 record that includes 21 knockouts. Fury has won five of his last six fights, and he’s coming off a February win over Wilder. Fury showed that the first bout wasn’t a fluke, as he was dominant from the start and didn’t let up despite winning every round. Most people thought Fury won the first meeting even after being dropped late, so he certainly proved those folks right and is now wildly considered the best heavyweight in boxing. Fury is 32 years old, stands at 6’9”, has an 85-inch reach and an orthodox stance. Fury continues to show he’s a unique heavyweight who moves like a middleweight and has quirky style that makes his opponent uncomfortable. Fury is always mixing up his stance, giving different looks and has faster hands than you’d expect from a guy his size. Fury can box from the inside and the outside, and he’s clearly not afraid of the power that Wilder brings to the table, as he’s attacked him without much care and has been able to slip most of those power punches. We haven’t seen a boxer like Fury in this division. This will be Fury’s fourth career fight in Las Vegas.

Wilder and plus money is worth a look based on his power, as he only needs to land one shot in 12 rounds to win a fight, while Fury has to outbox an opponent for 12 rounds and avoid that haymaker. There’s going to be a lot of people who bet on Wilder because of the value, and I wouldn’t talk them off that ledge. The problem is we’ve seen this fight twice and Fury has been the better boxer for majority of both bouts. If Fury didn’t get dropped late in the first meeting, he’s credited with two wins and we’re not even having a trilogy. I think a lot of the excuses Wilder has thrown out there are BS. We also have no idea how Wilder is going to respond to adversity, as he’s never been in this spot before.

Fury is the safer bet.