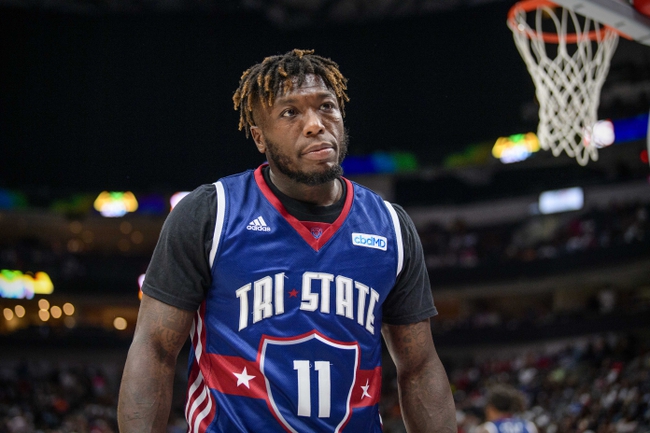 Jake Paul and Nate Robinson fight in a boxing match Saturday at the Staples Center.

Jake Paul enters this fight with a 1-0 record that includes one knockout. Paul will fight for the second time this year and is coming off a January win over Ali Eson Gib. Paul is 23 years old, stands at 6’1” with a 76-inch reach and an orthodox stance. Paul is a popular Youtuber and Internet personality who is just now entering the boxing scene. Paul obviously has a lot of work to do from a technique standpoint, as he was sloppy at times, inaccurate with his shots and really took advantage of an equally bad opponent who fought a lot in a crouched position which led to him falling a lot. Paul deserves credit for the win, especially with the lack of experience, but he’s in no way ready to quit his day job and take on boxing full time. With that said, Paul does let his hands go and does put something behind his shots. For a celebrity, you can certainly do a lot worse than what Paul showed in his debut.

Nate Robinson enters this fight with a 0-0 record that includes zero knockouts. Robinson will make his boxing debut in this bout, and he stands at 5’9” with an orthodox stance. Robinson is a 36-year-old basketball player who played for eight different teams, his most being five years with the New York Knicks. Robinson is a three-time NBA Slam Dunk Champion and was a two-time first-team All-Pac-10 selection for the Washington Huskies back in college. Robinson obviously has no boxing experience, but he is a stalky athlete with a muscle frame and played football in high school. Robinson may be small, but he’s built well and has some toughness to him. Let’s not forget Robinson getting into a scuffle with JR Smith back in the day, somebody who has nine inches and 40 pounds on him. You have to have toughness to carve out a lengthy NBA career as a small guy. Robinson is somebody who probably would have been successful at whatever sport he picked.

I get that Paul is the more known name and has the boxing experience, but this line makes no sense to me. Paul wasn’t impressive in his debut and isn’t somebody you should be laying juice with. Robinson is an elite athlete with a much more muscle frame and will probably look better in the ring despite no experience. I’m sure Robinson can put his punches together cleaner and I’m also certain he packs more of a punch as well. You have to be really high on Paul to be laying these prices against an athlete like Robinson. This will be nothing like the bout against Eson Gib.

Give me Robinson and the sweet plus money.