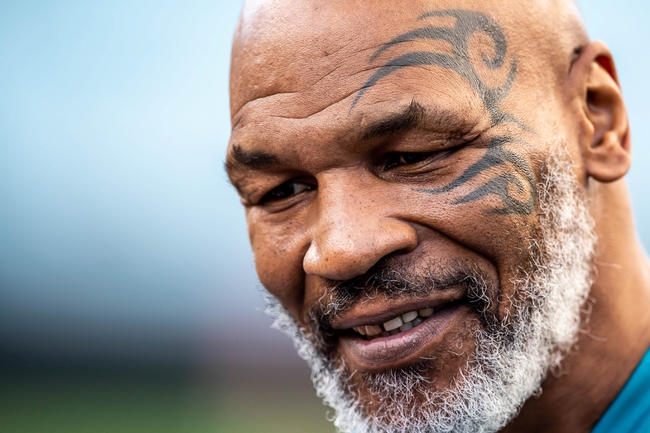 Mike Tyson and Roy Jones Jr. fight in a boxing match Saturday at the Staples Center.

Mike Tyson enters this fight with a 50-6 record that includes 44 knockouts. Tyson has lost three of his last four fights and is coming off a 2005 loss to Kevin McBride. Tyson is 54 years old, stands at 5’10”, has a 71-inch reach and an orthodox stance. During his prime, Tyson was the scariest fighter on the planet, as he had devastating punching power and often boxed angry, looking to punish his opponent. Tyson fought a lot of demons in his life and it felt like the boxing ring was the one place where he could let loose and take out frustration. Tyson has a ducking and crouching style where he gets under his opponents shots and unloads with a counter hook, getting most of his power from his legs. Tyson had underrated hand speed and solid head movement, but he took a lot of punishment later in his career and was knocked out in five of his six losses. For a guy his age, Tyson looks to be in great shape and some of those highlights on the Internet convince you he could really be effective in a comeback. Tyson has also turned his life around, which includes him having a popular podcast. Tyson is a different guy now, but getting in that ring for the first time in over a decade could bring back memories.

Roy Jones Jr. enters this fight with a 66-9 record that includes 47 knockouts. Jones has won his last four fights, and he’s coming off a 2018 win over Scott Sigmon. Jones is 51 years old, stands at 5’11”, has a 74-inch reach and an orthodox stance. Jones held world championships in four different weight classes and was the undisputed light heavyweight champion in 1999. Jones won his last fight nearly three years ago despite fighting with a torn bicep in his left arm, and he showed decent hand speed and the ability to still put combinations together. It was Jones’ quickness, hand speed and his reflexes that made him one of the best boxers of all time. Jones ability to throw multiple hooks in a combination and bait his opponent because of his head movement and foot speed is unmatched. Jones was an elite counterpuncher and would set traps for his opponent to only counter with bombs. Many would argue that Jones was faster than Floyd Mayweather, which is crazy because he’s the bigger fighter. The hand speed hasn’t completely left, but it’s obvious Jones isn’t the same fighter he was 20 years ago, so it’s going to be interesting.

Jones at this price is intriguing because he’s been in the ring somewhat recently. Yes, Tyson has been working out like a mad man lately and is in wonderful shape, but he hasn’t had a competitive boxing match in 15 years. That’s an insane amount of time away from the sport. With that said, Tyson has the overwhelming power advantage in this fight and that should be key with two guys over 50 years old. Boxers tend to hit the canvas a little easier as they age and I wouldn’t want to take a shot from Tyson given what we’re seeing from these Instagram posts. Also, while the hand speed of Jones is still there, his feet have slowed down and he’s more of a sitting target based on his last few fights. We also can’t ignore that Tyson has mentioned he could continue fighting after this considering how good he feels. That’s not what you want to hear if you’re on the other side. Anything can happen in this bizarre matchup, but on paper, Tyson should win.

I’ll lay the juice with Tyson.