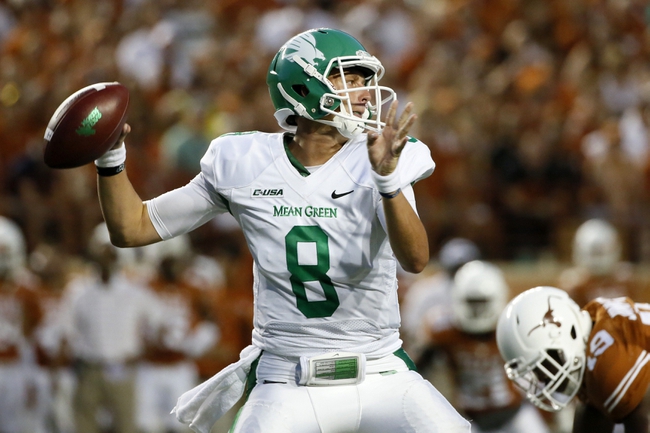 The Southern Methodist Mustangs were in the wrong place at the wrong time in a 45-0 loss at the Baylor Bears in week one. Baylor jumped out to a 24-0 lead after one quarter on the way to 574 yards and 31 first downs and were never threatened. The Mustangs totaled a mere 74 yards and seven first downs and commited three turnovers. The rushing attack produced a total of -24 yards thanks to sacks but even without sacks the Mustangs mustered 39 yards on 14 carries. SMU received 59 passing yards from Nate Burcham on a 15-26 effort but the bottom line is the Mustangs didn't move the chains and Baylor did.

The North Texas Mean Green had high hopes of challenging the Texas Longhorns in their opener but when the dust had settled it was Texas walking away with a dominant 38-7 victory. The Mean Green held their own defensively with the Longhorns gaining 353 yards and losing two fumbles. The UNT offense was a completely different story with only 94 yards to their credit. The Mean Green's lone bright spot was Reggie Pegram's 50 rushing yards with Josh Greer and Andrew McNulty going a combined 3-17 for 15 yards with a pair of interceptions apiece with one ending up as a pick six. The D recovered a Longhorns fumble in the endzone for the lone score.

This one should be relatively close especially after both were knocked around in their openers. No line out yet but expect North Texas to be favored and please check bck later for a pick...