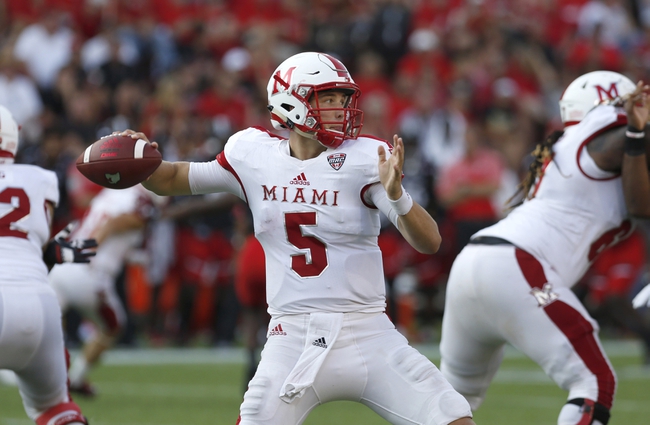 The Miami (OH) Redhawks visit the Akron Zips in week six looking for their first win.

The Miami (OH) Redhawks have kept the scoreboard under control but have not been able to score. That was the case once again in a 17-7 defeat to visiting Ohio in which they allowed less then 200 yards but mustered only 238 with four turnovers and that’s not a winning combination. Miami (OH) quarterback Billy Bahl struggled to 4-9 for 51 yards and a pair of interceptions before Noah Wezensky came in to go 14-25for 154 yards and a touchdown. James Gardner led the Redhawks with four receptions for 63 yards while Ryan Smith caught a 14 yard scoring strike. Alonzo Smith was the only viable rushing option with a 14 carry, 59 yard performance but Miami (OH) gave up a TD on a fumble in the endzone with 1:30 left to ice the game.

The Akron Zips have big hopes of a Bowl berth in 2016 so a loss at Kent State in week five could have been a disaster. Disaster averted with a last second touchdown leading to a 31-27 victory despite getting outgained 423-378 and giving up the ball away three times. Akron quarterback Tra’Von Chapman had a shaky afternoon under center, completing 11-28 for 237 yards and two touchdowns and a pair of interceptions with Kwadarrius Smith snaring two passes for 75 yards while Van Edwards Jr. and Austin Wolf catching TD’s. Edwards Jr. and Chapman were  the Zips rushing attack with a combined 83 yards on 17 carries but nothing was explosive.