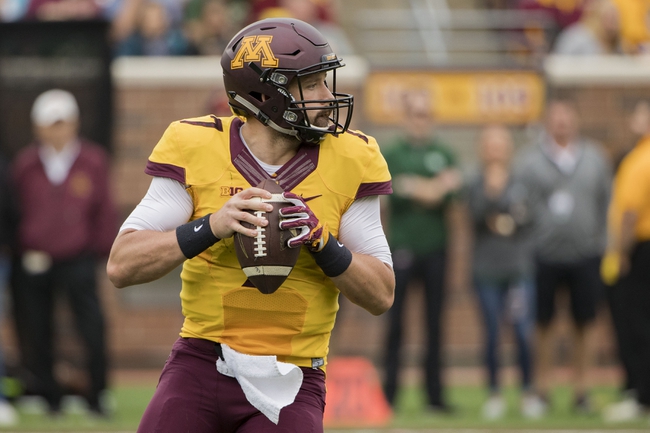 The Iowa Hawkeyes have not lost a road game since November of 2014, which happened to be against the Minnesota Golden Gophers. C.J. Beathard is completing 61.7 percent of his passes for 945 yards, nine touchdowns and two interceptions. Beathard has at least one touchdown pass in nine straight games. Matt VandeBerg and George Kittle have combined for 494 receiving yards and five touchdowns while Jerminic Smith has 10 receptions. The Iowa Hawkeyes ground game is averaging 143.2 yards per contest, and LeShun Daniels, Jr. leads the way with 373 yards and four touchdowns. Defensively, Iowa is allowing 18.4 points and 364.6 yards per game. Josey Jewell leads the Hawkeyes with 49 tackles, Matt Nelson has four sacks and Brandon Snyder has one interception.

The Minnesota Golden Gophers hope to bounce back from a tough loss to Penn State and have a chance to win four straight home games. Mitch Leidner is completing 62.9 percent of his passes for 840 yards, five touchdowns and two interceptions. Leidner has one or less touchdown passes in seven of his last eight games. Drew Wolitarsky and Brian Smith have combined for 506 receiving yards and four touchdowns while Nate Wozniak has seven receptions. The Minnesota Golden Gophers ground game is averaging 228.2 yards per contest, and Rodney Smith leads the way with 402 yards and five touchdowns. Defensively, Minnesota is allowing 26 points and 378.3 yards per game. Jack Lynn leads the Golden Gophers with 27 tackles, Tai'yon Devers has three sacks and Damarius Travis has one interception.

Minnesota hung with Iowa in last years meeting on the road in which it scored 35 points. The Hawkeyes haven't looked great this season, losing two of their last three games and even struggling with Rutgers on the road. Minnesota is a grind it out team that's tough to beat, especially at home. With this game taking place at TCF Bank Stadium, Minnesota should probably be the team that's favored. Iowa hasn't lived up to its potential and will certainly have its hands full against a Golden Gophers team that always competes.

Give me the home team to win this outright.