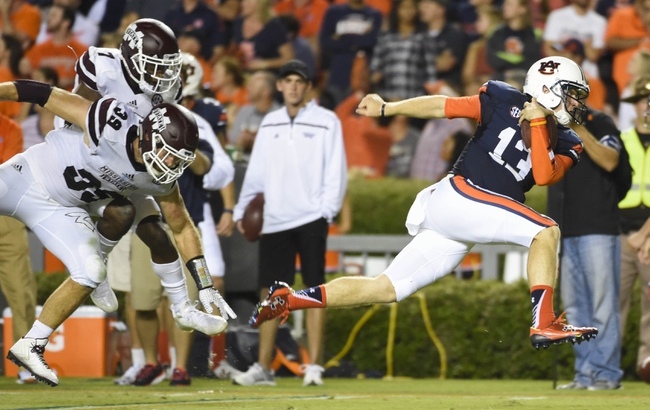 The Mississippi State Bulldogs and the Auburn Tigers face off on Saturday in Week 6 SEC college football action.

The Auburn Tigers are 3-2 this season and they are playing their first road game of the season. The Auburn offense is averaging 31.2 points and 488.6 yards per game and they have turned the ball over 7 times. Tigers QB Sean White has completed 68.4 percent of his passes with5 touchdowns and a touchdown and he has rushed for another touchdown. Kerryon Johnson is Auburn’s leading rusher with 517 yards and 6 touchdowns and Tony Stevens is the top receiver with 21 catches and 3 touchdowns and Ryan Davis has 17 receptions. The Auburn defense is allowing 16.4 points and 358.4 yards per game with 2 interceptions, 3 fumble recoveries, and 11 sacks. Johnathan Ford is Auburn’s leading tackler with 31, Tray Matthews has 29 tackles, and Tre’ Williams has 28 tackles.  Auburn has won their last 2 games.

This is not one of the better Mississippi Stat teams and they have lost too much worse than this and I expect them to struggle here. Auburn is far from a contender but I see them having the better athletes and on that alone they win and cover.