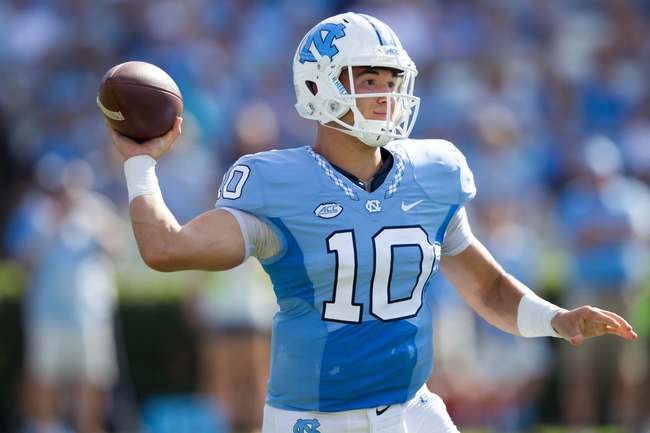 Virginia Tech comes into this game at a comfortable 3-1, following a 54-17 blowout over East Carolina in their last appearance. The Hokies were able to score on their final five possessions in the first half to essentially put the game away before the break at 38-0. Virginia Tech QB Jerod Evans had himself a nice game, leading in both passing (13-of-20; 282 yards; 3 TD) and rushing (10 rushes; 97 yards; one TD). Isaiah Ford helped things along for the Hokies through the air, pulling down four receptions for 117 yards and a TD.

For Virginia Tech so far this year, Evans is 69-of-103 for 970 yards and 13 touchdowns. Travon McMIllian leads the Hokies on the ground with 48 carries, 212 yards and two touchdowns, while Ford leads the Virginia Tech receiving corps with 24 receptions for 376 yards and four scores.

Over on the Tar Heels’ side, they’re coming in at a happy 4-1, winning four straight after dropping their opener to Georgia. This past Saturday, North Carolina eked out a 37-35 win over Florida State, snapping the Seminoles’ 22-game home winning streak. Tar Heels kicker Nick Weiler nailed a career-best 54-yard field goal as time expired to seal the win in that one, while QB Mitch Trubisky was near-perfect with a 31-of-38 line for 405 yards and three touchdowns. T.J. Logan held down the Tar Heels’ rushing attack with 10 carries for 77 yards and a score, and Ryan Switzer led the North Carolina receiving corps with 14 grabs for 158 yards.

So far this season in North Carolina, Trubisky is 133-of-175 with 1711 yards and 13 touchdowns. Elijah Hood still leads the rushing attack on 67 carries for 338 yards and four touchdowns, while Switzer is the Tar Heels’ leading receiver on 47 grabs for 587 yards and two scores.

The Hokies have some tough games coming up (including this one), and we’re going to see what they’re made of very soon. For the purposes of this game, however, I don’t see Virginia Tech winning over quality competition (and I’m thinking of their 49-0 loss to Boston College). Trubisky and the Tar Heels shouldn’t have too much trouble covering with that versatile and potent offense of theirs.