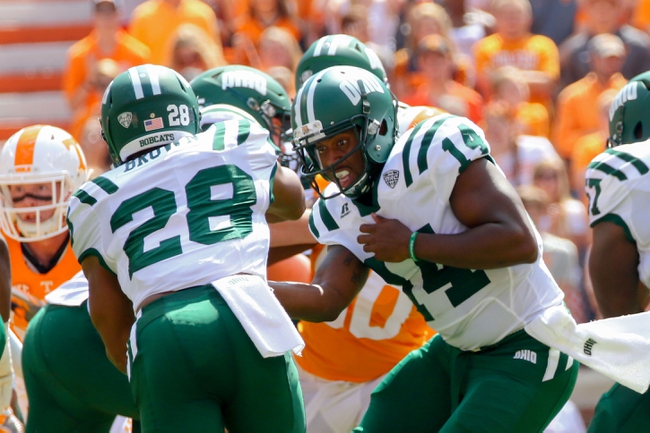 The Bowling Green Falcons are in an early season funk and have to turn things around immediately because a Bowl berth is already on the line. The Falcons have dropped three in a row after a 28-25 defeat to visiting Eastern Michigan as a 2.5 point favorite. EMU held a slight 478-456 yardage edge with both teams being able to both run and throw. BGSU James Morgan was good and bad as he connected on 23-46 for 250 yards and a touchdown and interception with favorite target Scott Miller hauling in eleven passes for 148 yards. Fred Coppet paced Bowling Green on the ground with 141 yards on 25 carries with a pair of two yard scoring runs.

In typical Ohio Bobcats fashion they are neither crushing opponents of getting crushed. The Bobcats wore down MAC foe Miami (OH) 17-7 as a two point road favorite in a game they never trailed in improving to 3-2. The Redhawks held a 238-201 edge in yards so this wasn’t a game fans of offense would have enjoyed. Quarterback Greg Windham had accuracy issues for the Bobcats, going 7-18 for 56 yards and an interception and ran 19 times for 31 yards and a touchdown. Bo Hardy was the best Ohio player on offense with 50 rushing on ten carries but in reality this game belonged to the Bobcats defense that forced four turnovers and recovered a fumble in the endzone in the closing minutes to seal the win.