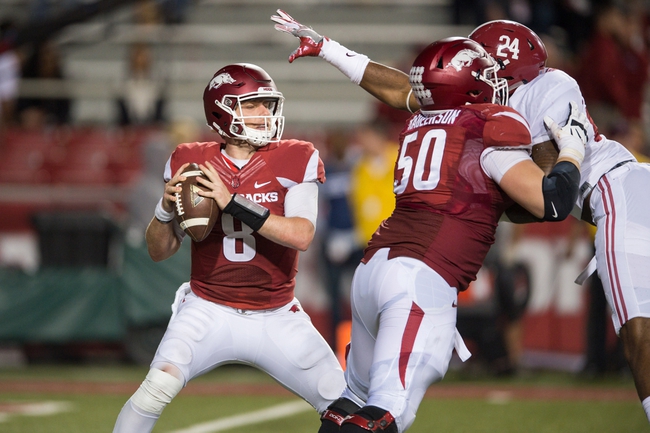 The Arkansas Razorbacks and the Ole Miss Rebels face off on Saturday in week 7 SEC college football action.

The Arkansas Razorbacks are 4-2 this season and are coming off of a a beat down loss at the hands of Alabama. Arkansas has been known for their slow starts to the season but they started quickly this year only to lose 2 of their last 3 games.  The Razorbacks offense is averaging 35 points and 448.3 yards per game and they have turned the ball over 12 times. Arkansas QB Austin Allen has completed 63.6 percent of his passes with 15 touchdowns and 5 interceptions and he has been sacked 14 times. The Arkansas running attack is led by Rawleigh Williams who has 605 yards and 5 touchdowns and Drew Morgan is the top receiver 33 catches and touchdown and Jared Cornelius has 19 catches and 4 touchdowns and Keon Hatcher has 18 catches and 5 touchdowns. The Arkansas defense is allowing 27.5 points and 398.2 yards per game with 6 interceptions, 7 fumble recoveries, and 13 sacks. Brooks Ellis leads the Hogs with 42 tackles, Dre Greenlaw 36 tackles, and Henre’ Toliver has 25 tackles. Arkansas will need to bounce back in a hurry facing yet another physical team.

The Ole Miss Rebels are 3-2 this season and are coming off of a bye week after blasting Memphis. Both of Ole Miss’ losses have been in comeback fashion where they allow leads to get away against Florida State and Alabama. The Mississippi offense is averaging 41.6 points and 491.4 yards per game and they have turned the ball over 9 times. Rebels QB Chad Kelly has completed 66.1 percent of his apsses with 13 touchdowns and 4 interceptions. Akeem Judd is Ole Miss’ top rusher with 3-2 yards and a touchdown and Evan Engram is the top receiver with 30 catches and 4 touchdowns and Van Jefferson has 21 catches and a touchdown. The Arkansas defense is allowing 29.6 points and 452.4 yards per game with 4 interceptions, 4 fumble recoveries, and 9 sacks. Demarquis Gates is Mississippi’s top tackler with 30, Zedrick Woods ahs 29 tackles, and Terry Caldwell has 27 tackles.  Ole Miss still has a chance to put together a big season but the defense will need to step it up.

Arkansas has to be physically spent after last week’s game against Bama while Ole Miss had a week off and should be fresh and ready to go. Look for Ole Miss to bust up the trends and get a big win here.