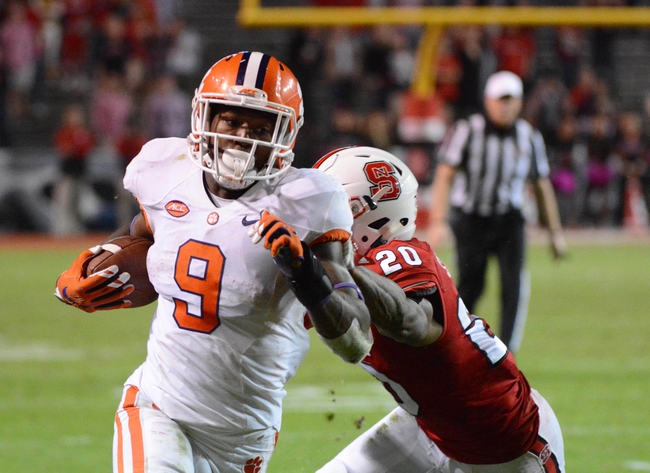 North Carolina State comes into this matchup with a 4-1 record on the year. The Wolfpack’s latest victory came in a wet, sloppy 10-3 result against Notre Dame. Due to the weather conditions, there wasn’t much passing going on, as Wolfpack QB Ryan Finley ended up just 5-of-12 for 27 yards. Matthew Dayes kept NC State’s offense churning along, however, with his 23 carries for 126 yards.

So far this year for the Wolfpack, Finley is 89-of-128 for 1041 yards and nine touchdowns, while Dayes leads the ground attack on 98 carries for 563 yards and three scores. Stephen Louis is North Carolina State’s top receiver with his 13 receptions for 328 yards and one TD.

Over on the Clemson side, they’re entering Week 7 with a perfect 6-0 record, fresh off a 56-10 drubbing of Boston College. In that game, Clemson overcame the aches and pains of a short week to extend their conference winning streak to 12 games and their road winning streak to eight (that ties a school record). Tigers QB Deshaun Watson was great here, snatching up a 14-of-24 line for 266 yards and four touchdowns. Wayne Gallman was his usual productive self on nine carries for 109 yards and a TD, while Deon Cain led Clemson in receiving with three grabs for 68 yards and two TDs.

On the Tigers’ season, Watson has accumulated a 124-of-205 line for 1568 yards and an 18:7 TD:INT ratio. Gallman sits atop the RBs with 88 carries for 475 yards and five scores, while Clemson WR Mike Williams leads the receivers on 27 receptions for 432 yards and three touchdowns.

Clemson has had a few relatively close calls this year, as three of their six wins were by just six points. The Tigers have faced some quality competition, however, and NC State will provide another fairly stout benchmark for the season. The Wolfpack have scored at least 30 points in four of their five games, and won’t wilt in the face of Clemson pressure. I think the Tigers will win this game, obviously, but North Carolina State has more than enough offensive ammo to cover what is a pretty thick spread.