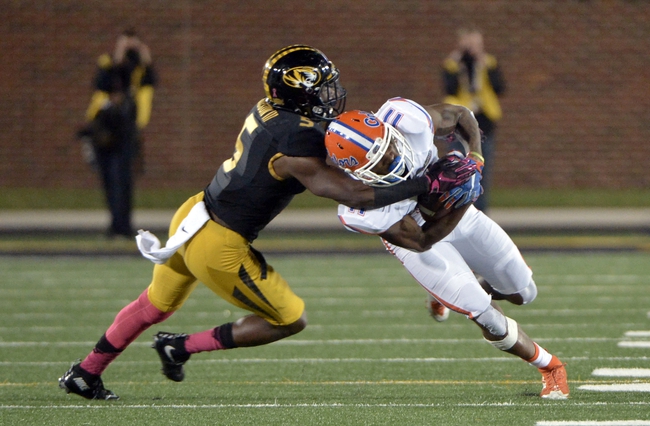 The Florida Gators and the Missouri Tigers face off on on Saturday in the Swamp in week 7 SEC college football action.

The Florida Gators are 4-1 this season and are coming off of an unplanned bye week after their game last week against LSU was cancelled. The LSU game still has not been rescheduled and as of now it looks like it might not be. The Florida offense is averaging 28.4 points and 407.2 yards per game and they have turned the ball over 5 times. Gators QB Luke Del Rio has missed the past several games but he is expected to be back here and for the season he has completed 61.4 percent of his passes with 6 touchdowns and 2 interceptions. Jordan Scarlett is UF’s top rusher with 274 yards and 4 touchdowns and DeAndre Goolsby leads in receiving with 22 catches and Antonio Callaway has 20 receptions and 2 touchdowns. Defensively Florida is allowing 11.6 points and 230.4 yards per game with 8 interceptions, 2 fumble recoveries, and 19 sacks. Jarrad Davis anchors the Florida defense with 40 tackles, Alex Anzalone has 32 tackles, and Marcus Maye has 29 tackles. Florida is living by their defense but with Del Rio back the offense could get a jolt of energy here.

The Missouri Tigers are 2-3 this season including a 0-2 record in the SEC. Missouri is coming off of a planned bye week so they should be fresh and ready for this one. The Missouri offense is averaging 37 points and 508.6 yards per game and they have turned the ball over 9 times. Mizzou QB Drew Lock has completed 56.8 percent of his passes with 14 touchdowns and 4 interceptions. Ish Witter leads the Missouri rushing attack with 257 yards and 2 touchdowns and J’Mon Moore has 27 receptions and 6 touchdowns. The Missouri defense is allowing 23.4 points and 421 yards per game with 7 interceptions, 3 fumble recoveries, and 9 sacks. Michael Scherer leads the Tigers with 42 tackles, Thomas Wilson has 39 tackles, and Donavin Newsome has 32 tackles. Missouri has played tough but they haven’t been able to beat the better teams.

This is a lot of points for what figures to be a low scoring game so getting nearly two touchdowns Missouri appears to be the play. We need to remember that Del Rio is a serviceable QB, not a superstar so his value here might be over rated.