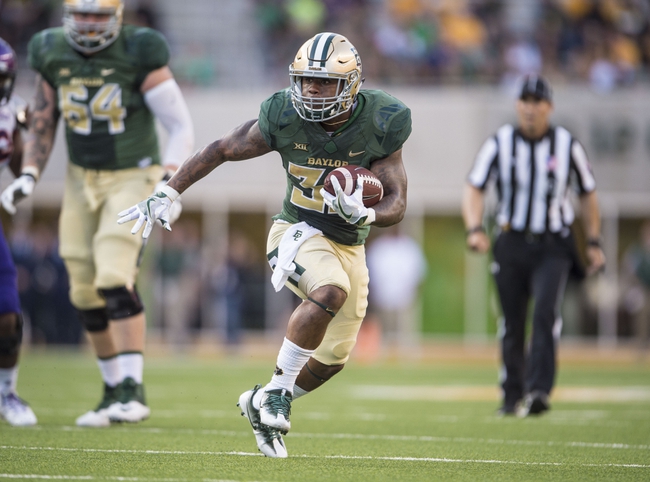 Down at McLane Stadium in Waco on Saturday, October 15, we’ve got Week 7 college football action between the Kansas Jayhawks and the Baylor Bears.

Kansas enters this game with a paltry 1-4 record this year, winning their opener and dropping the next four. The Jayhawks’ latest loss came this past weekend against TCU, dropping a heartbreaker 24-23. In that one, Kansas QB Ryan Willis went 31-of-45 with 348 yards but had three ugly interceptions. Taylor Martin led the Jayhawks ground attack with 18 carries for 68 yards and a TD, while LaQuvionte Gonzalez was the high man in receiving with eight catches for 131 yards.

So far this year, Willis is 62-of-98 with 722 yards and a 3:4 TD:INT ratio for Kansas, while Ke’aun Kinner leads the rush with 40 carries for 215 yards and a TD. Seven Sims Jr. is tops in the receiving game for the Jayhawks with his 26 catches for 413 yards and five touchdowns.

Over on the Baylor side, they’re cruising at 5-0 on the year, fresh off a 45-42 victory over Iowa State on October 1. The Bears were down heading into the fourth quarter, but outscored Iowa State 17-0 in the final frame with a patented defensive stand. RBs Shock Linwood and Terence Williams were the big stars for Baylor here, putting up a combined 363 yards and three touchdowns on 41 carries. Bears WR Blake Lynch also had a big day on three catches for 80 yards.

Kansas has been on the ropes this year, and hasn’t been able to do much on either side of the ball. The Jayhawks have lost by at least 16 points in four of their five games this year, and have only scored more than 21 points once. Conversely, Baylor has been just about unstoppable, with at least 35 points in every game. The Bears have also allowed more than 24 points just once this year. Looking at those numbers, this looks like a blowout in every sense of the word. I’ll take a well-rested Baylor all day long.