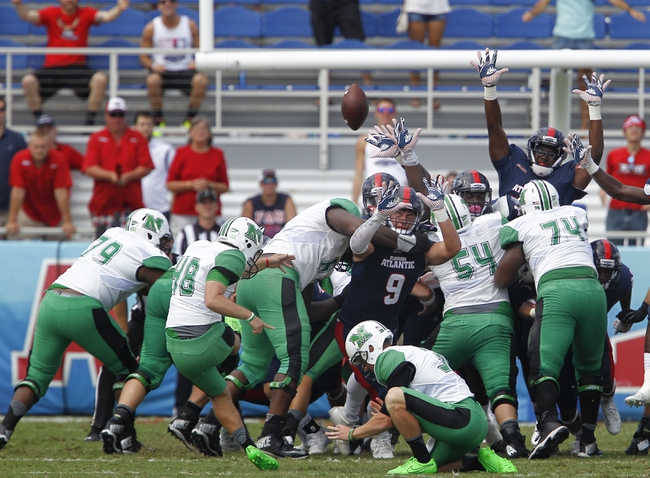 The Florida Atlantic Owls go on the road to take the field with the Marshall Thundering Herd in week 7 college football action.

The Florida Atlantic Owls began the season with a win versus Southern Illinois but it has been downhill since with five consecutive losses capped off by a 28-23 defeat to visiting Charlotte as a 13 point favorite. FAU managed to keep things close despite a 442-386 deficit in real estate with the defense forcing a pair of turnovers. Florida Atlantic quarterback Jason Driskel connected on 17-30 for 162 yards and an interception but everything was short and the passing attack needed a downfield threat. Greg Howell was the Owls star with 100 rushing yards and three trips to the endzone on 20 touches while Kalib Wood recorded eleven receptions for 105 yards.

The Marshall Thundering Herd were supposed to have enough talent to be a factor in the conference but it hasn’t played out that way. The Thundering Herd defeated FCS opponent Morgan State to kick off 2016 but have since dropped four in a row with a defense that can not get stops. The Thundering Herd were pounded 38-21 at North Texas as a 13 point favorite as the Mean Green dominated total yards 458-271 and held the ball for over 36 minutes. With almost no rushing attack, Marshall turn to the passing of Chase Litton who completed 20-42 for 258 yards and a touchdown and a pick six. Michael Clark gave the Thundering Herd eight catches for 122 yards but the offense was a non factor otherwise.