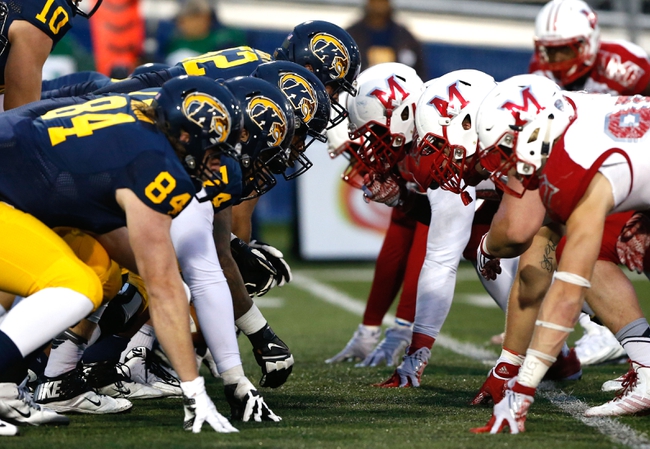 The Kent State Golden Flashes hope for another conference win at the Miami (OH) Redhawks in week 7 college football.

The Kent State  Golden Flashes have been known for their defense and controlling the scoreboard but enjoyed a rare offensive explosion in a 44-20 rout of Buffalo on the road. The Golden Flashes were up 17 heading to the locker room and never took their foot off the gas. Kent out gained the Bulls 430-372 with 361 yards coming on the ground behind running back turned quarterback Nick Holley. Holley threw for just 89 yards on 7-13 but gave the Golden Flashes a monster 224 rushing yards and four touchdowns on 24 carries as the team averaged over 7 ½ yards per touch. Justin Rankin and Kavious Price paced the Kent State receiving corps with five catches for 76 yards as the offense stayed on the ground for good reason.

The Miami (OH) Redhawks have played several close games already this season but week six’s 35-13 defeat at Akron as an 11.5 point underdog wasn’t one of them. The Redhawks trailed 21-6 at the break and never recovered as they were outgained 299-260 but turned the ball over three times. Miami (OH) needed more from their rushing attack with 86 yards on 17 carries from Alonzo Smith  being the extent of their success on the ground. Redhawks quarterback Noah Wezensky connected on 14-28 for 153 yards and a touchdown with a pair of interceptions  with top receiver Ryan Smith grabbing five passes for 62 yards including a six yard score but the passing attack couldn’t stretch the field.

No line is out because of injuries so please check back.

The pick in this article is the opinion of the writer, not a Sports Chat Place site consensus.
Previous Pick
Ohio Bobcats vs. Eastern Michigan Eagles - 10/15/16 College Football Pick, Odds, and Prediction
Next Pick
Toledo Rockets vs. Bowling Green Falcons - 10/15/16 College Football Pick, Odds, and Prediction