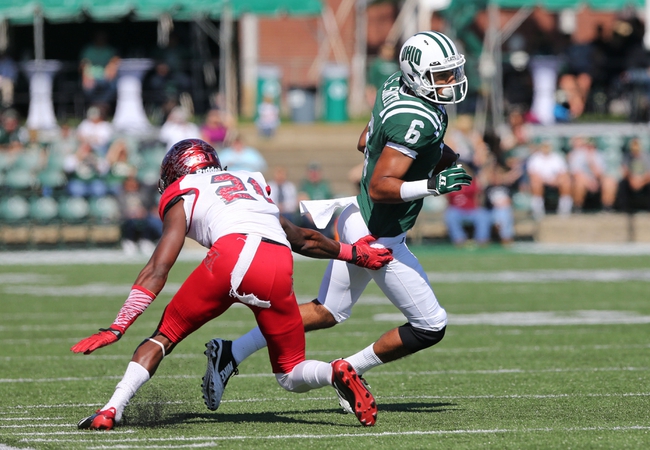 The Eastern Michigan Eagles have looked improved over prior years but a 35-20 loss to visiting Toledo as a three touchdown home dog says they still have a ways to go. The Eagles lost the yardage battle 467-317 with a pair of turnovers and less then 23 minutes of possession. The Rockets were balanced but EMU was a pass only with just 62 yards doming on the ground. Eastern Michigan quarterback Brogan Roback completed 20-38 for 255 yards and a touchdown with an interception with Sergio Bailey and Eddie Daugherty combining for 163 yards on nine receptions while Antoine Porter snagging a five yard score.

The Ohio Bobcats haven’t always been impressive but at the end of the day they have still won three in a row. The Bobcats come off  of a 30-24 victory versus visiting Bowling Green as an 11.5 point favorite. The yardage was about even with Ohio holding a slight 386-367 edge while forcing four turnovers. Bo Hardy paced the Bobcats on the ground with 83 yards on 16 carries while Maleek Irons and Greg Windham combined for 107 yards with three trips to the endzone. Windham gave Ohio a short but effective passing attack on 20-27 for 190 yards with a touchdown and interception with leading receiver Sebastian Smith recording five receptions for 72 yards including a 15 yard scoring strike.