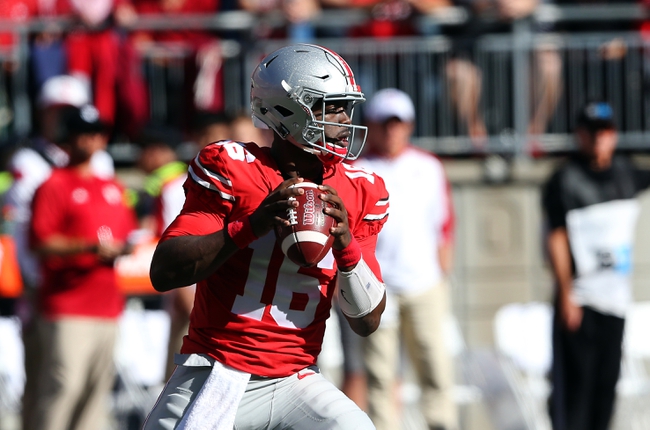 Ohio State comes into this one cruising on a 5-0 record and a No. 2 national ranking. The Buckeyes’ latest victory came this past Saturday against Indiana in a 38-17 affair. In that one, Ohio State had to rely on the running game, with JT Barrett leading the way on 26 carries for 137 yards and a touchdown—as well as a 9-of-21 passing mark for 93 yards, a TD and an interception. Dontre Wilson led the Buckeyes in receiving here, with three catches for 42 yards and a TD.

So far this year, Barrett is 79-of-123 for 981 yards and 15 touchdowns, while Ohio State’s leading rusher is Mike Weber with 83 carries for 566 yards and four scores. Curtis Samuel is the Buckeyes’ leading receiver on 23 catches for 345 yards and a TD.

Over on the Wisconsin side, they’re entering play this weekend with a 4-1 record, winning their first four games and dropping the October 1 matchup at Michigan 14-7. The Badgers had the score tied going into the fourth quarter, but allowed a late touchdown that sealed their fate. Wisconsin QB Alex Hornibrook had a forgettable game on 9-of-25 passing for 88 yards, a TD and three interceptions. Corey Clement led the way rushing for the Badgers with 17 carries for 68 yards as part of a paltry 71-yard day on the ground overall.

For Wisconsin so far this year, Bart Houston still leads the passing game with 44 completions for 527 yards, two touchdowns and two interceptions. Clement is atop the Wisconsin rushers on 82 carries for 319 yards and five touchdowns, while Jazz Peavy heads up the receiving attack with 17 receptions for 281 yards and two TDs.

Ohio State is a flat-out offensive powerhouse. The Buckeyes have scored at least 38 points in every game this year, and have hit at least 45 in four of their five games. As for Wisconsin, they’ve managed to get over 23 points just twice this year and seem to falter when going up against stiffer defenses. The Badgers are a running, ball-control team overall, and simply not suited to keep up with the Buckeyes’ onslaught on the scoreboard. The line seems about right, but I’ll take Ohio State to cover relatively easily here.