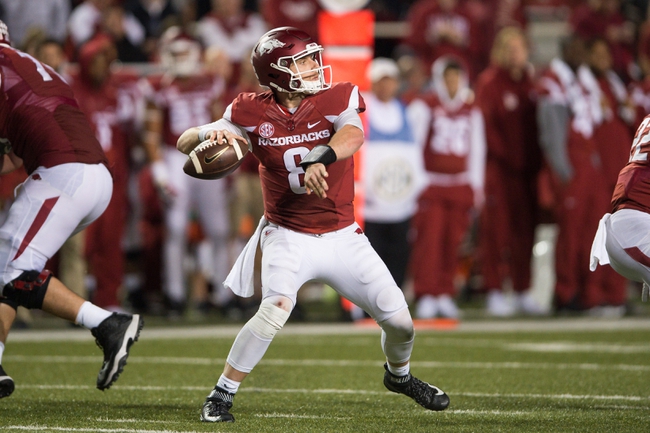 The Ole Miss Rebels have won three of their last four games and take the road for the first time this season. The Ole Miss Rebels have split their last eight road games. Chad Kelly is completing 66.1 percent of his passes for 1,596 yards, 13 touchdowns and four interceptions. Kelly has two or more touchdown passes in 10 of his last 11 games. Evan Engram and Damore'ea Stringfellow have combined for 784 receiving yards and six touchdowns while Van Jefferson has 21 receptions. The Ole Miss Rebels ground game is averaging 157 yards per contest, and Akeem Judd leads the way with 302 yards and two touchdowns. Defensively, Ole Miss is allowing 29.6 points and 449.4 yards per game. DeMarquis Gates leads the Ole Miss Rebels with 30 tackles, Marquis Haynes has three sacks and Zedrick Woods has two interceptions.

I'm not sure why Arkansas is such a heavy underdog at home against an Ole Miss club that struggles to finish games against above average teams. Yes, Arkansas looked bad against Texas A&M and Alabama, but both the Aggies and the Crimson Tide are legit top-10 teams and those losses don't change how I see the Razorbacks. The Arkansas Razorbacks are still a physical, tough team to play and I'm not going to lay this many points with an Ole Miss club that always finds ways to lose games.

This line is simply confusing and maybe oddmakers know something we don't. Either way, I'm taking my free touchdown and the home team.