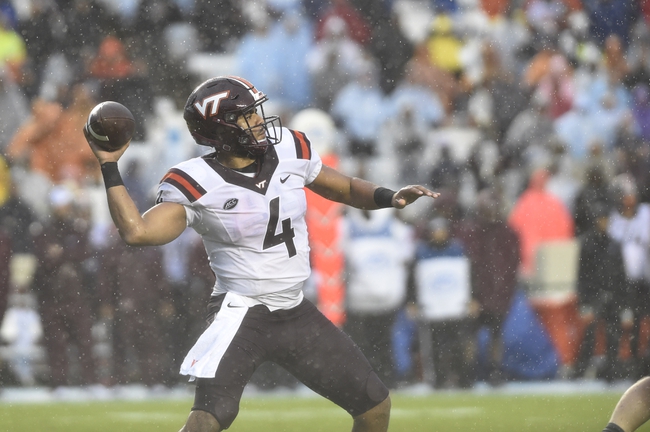 On Saturday, October 15 at the Carrier Dome, we’ve got Week 7 ACC college football action as the Virginia Tech Hokies meet up with the Syracuse Orange.

Virginia Tech comes into this game with an impressive 4-1 record. In the Hokies’ last game, they beat up on North Carolina 34-3. The Virginia Tech defense was the star of the show here, holding UNC to just 58 yards passing and 73 total yards rushing in the wet, sloppy conditions. On the offensive side for the Hokies, Jerod Evans was 7-of-17 for 75 yards and two touchdowns, while Travon McMillian had 17 carries for 76 yards and a TD.

So far this season for Virginia Tech, Evans holds a 76-of-120 line for 1045 yards and 15 touchdowns. McMillian is the Hokies’ rushing leader on 65 carries for 288 yards and three scores, while Isaiah Ford is tops in the receiving game with 24 receptions for 376 yards and four touchdowns.

Over on the Syracuse side, they’re sitting on a 2-4 record right now, fresh off a 28-9 loss to Wake Forest last Saturday. The Orange were had a 14-9 score heading into the fourth quarter, but gave up two more touchdowns to seal their fate in another rainy game. On offense, Syracuse QB Eric Dungey logged a 16-of-25 line for 156 yards and an interception, while Dontae Strickland handled the ground duties with 13 carries for 74 yards and one TD. Steve Ishmael was the Orange’s standout receiver, with five catches for 56 yards.

On the year thus far for Syracuse, Dungey is 164-of-255 for 1886 yards and 11 touchdowns. Amba Etta-Tawo leads the Orange in receiving with 51 catches for 876 yards and six TDs, while Strickland holds 86 carries for 343 yards and one score.

Virginia Tech has been an offensive dynamo this year so far. Excluding their loss, the Hokies have scored at least 34 points in every game of the season. On the other side, Syracuse has given up at least 28 points in all four of their losses, and seem to be on the ropes against offense-minded teams. The line here seems about right, but it’s still thick enough to make a person think twice before choosing. That said, I do believe Virginia Tech will be on the higher side of the spread, so I’ll take the Hokies to cover.