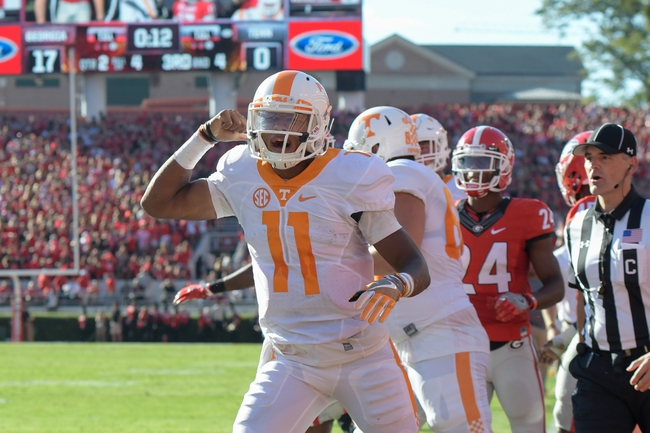 The Tennessee Volunteers and the Alabama Crimson Tide face off on Saturday in Knoxville in a week 7 college football SEC rivalry game.

The Tennessee Volunteers are 5-1 this season and they are coming off of their first loss of the year at Texas A&M as their comeback come up short and they lost in overtime. After back-to-back road games the Vols return home where they are a perfect 4-0 this season though they have trailed in just about every game they have played thus far. The Tennessee offense is averaging 33.8 points and 432 yards per game and they have turned the ball over 16 times. Volunteers QB Joshua Dobbs has completed 58.3 percent of his passes with 14 touchdowns and 8 interceptions and he has rushed for 324 yards and 5 touchdowns. In the Tennessee backfield top rusher Jalen Hurd is questionable with a concussion and if he can’t go it will mean more playing time for Alvin Kamara who is averaging 5.2 yards per carry with 2 rushing touchdowns and he leads the team in receptions with 20 with 3 going for touchdowns while Josh Malone has 17 receptions and 3 touchdowns and Jauan Jennings has 17 catches and 3 touchdowns. The Vols defense is allowing 26.7 points and 399.3 yards per game with 5 interceptions, 8 fumble recoveries, and 9 sacks. Todd Kelly Jr. and Colton Jumper Tennessee’s top tacklers with 39 each while Derek Barnett has 5 sacks but the unit could get a boost this week if Jalen Reeves-Maybin is able to return. Tennessee has been tough at home and looks that at any given time can play with anyone but we will find out exactly where they stand in the big picture after this game.

The Alabama Crimson Tide are 6-0 this season and number one ranked in the nation and they are playing on the road for the 4th time this season. Alabama has dominated every opponent they have faced on both sides of the ball and they don’t have the look of a team that will beat themselves. The Crimson Tide offense is averaging 44.8 points and 489.8 yards per game and they have turned the ball over 8 times. Bama freshman QB Jalen Hurts has been exceptional completing 63.8 percent of his passes with 9 touchdowns and 2 interceptions and he has rushed for 296 yards and 5 touchdowns and appears to be playing well beyond his experience level. Damien Harris is Alabama’s top rusher with 478 yards and a touchdown while Joshua Jacobs also sees a lot of action with 37 carries and 3 touchdowns while Calvin Ridley is the top receiver with 34 catches and 4 touchdowns and ArDarius Stewart is healthy once again and he has 18 catches and 3 touchdowns despite missing 2 games. The Alabama defense is allowing 15.8 points and 292.5 yards per game with 6 interceptions, 7 fumble recoveries, and 24 sacks. Reuben Foster leads Alabama with 37 tackles, Shaun Dion Hamilton has 34 tackles, and Minkah Fitzpatrick has 27 tackles. Alabama is looking like a force and any team hoping to beat them will have to hope they catch them on a flat day.

Tennessee has been fortunate and to their credit they have played hard to come back in every game they have been in but Alabama isn’t a team that you want to be behind on because if the offense losses balance, their pass rush will be unstoppable. Look for Alabama to roll here and make a statement.