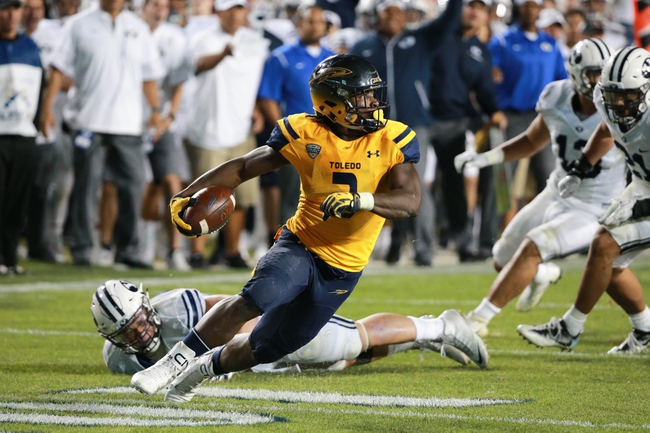 The Toledo Rockets look for another conference win when the Bowling Green Falcons visit in week seven college football.

The Bowling Green Falcons fell behind early and just couldn’t catch up at Ohio in a 30-24 defeat as an 11.5 point underdog in week six for loss number three in a row. The Bobcats held a 386-367 yardage edge but the Falcons committed four turnovers which made the close score surprising. BGSU didn’t have much of a rushing game to lean on with Fred Coppet totaling 66 yards with a TD on 19 touches while Josh Cleveland added 65 yards on only seven carries.  Bowling Green quarterback Josh Morgan connected on 22-38 for 253 yards and two touchdowns with an interception with Ronnie Moore snaring three passes for 76 yards.

The Toledo Rockets shook off the disappointment of a loss to Brigham Young to upend Eastern Michigan 35-20. This was just a 7-3 Rockets lead at the break as a three touchdown home favorite before the team finally woke up in the second half. Toledo owned the real estate battle 467-317 and forced a pair of turnovers so on paper the margin of victory seemed small. Rockets quarterback Logan Woodside was deadly efficient, completing 25-31 for 247 yards and four touchdowns with Cody Thompson hauling in seven throws for 126 yards including a 63 yard scoring strike. Kareem Hunt led Toledo on the ground with 141 yards and a score on 29 touches while Terry Swanson ran for 71 yards.