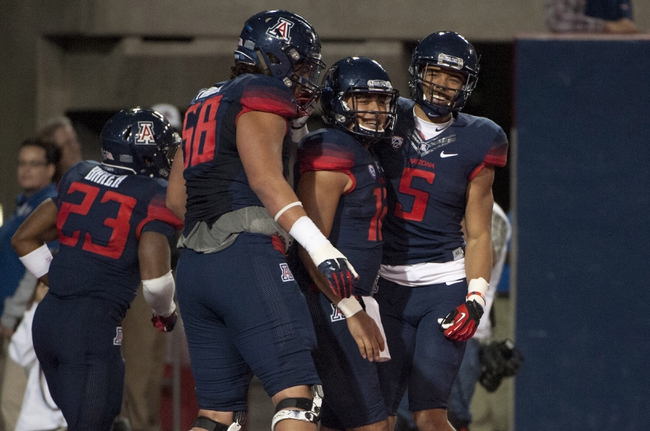 The USC Trojans look for their first road victory of the season to get a game above a .500 record. The USC Trojans have lost four of their last six true road games. Sam Darnold is completing 67.8 percent of his passes for 1,099 yards, eight touchdowns and two interceptions. Darnold has six touchdown passes in his last two games. JuJu Smith-Schuster and Darreus Rogers have combined for 748 receiving yards and five touchdowns while Deontay Burnett has 22 receptions. The USC Trojans ground game is averaging 153.1 yards per contest, and Justin Davis leads the way with 476 yards and two touchdowns. Defensively, USC is allowing 25.7 points and 375.3 yards per game. Cameron Smith leads the USC Trojans with 49 tackles, Porter Gustin has two sacks and Adoree' Jackson has two interceptions.

The Arizona Wildcats could use a feel good victory in order to snap a rough three-game losing streak. The Arizona Wildcats have won 10 of their last 14 home games. Brandon Dawkins is completing 58.5 percent of his passes for 941 yards, five touchdowns and three interceptions. Dawkins has one touchdown pass in each of his last five games. Shun Brown and Trey Griffey have combined for 658 receiving yards and four touchdowns while Samajie Grant has 16 receptions. The Arizona Wildcats ground game is averaging 226.8 yards per contest, and Dawkins leads the way with 484 yards and eight touchdowns. Defensively, Arizona is allowing 35 points and 458 yards per game. Michael Barton leads the Arizona Wildcats with 38 tackles, DeAndre' Miller has three sacks and Demetrius Flannigan-Fowles has two interceptions.

The last four games between Arizona and USC have been decided by a combined 20 points. USC has won the last three games against Arizona but none of those games were decided by more than eight points. Arizona plays well at home and still has the offense to hang around with most teams in the Pac-12. While USC is playing better, the Trojans have yet to prove they can get things done on the road.

Given the history between these two teams, I'm taking Arizona at home and the points.