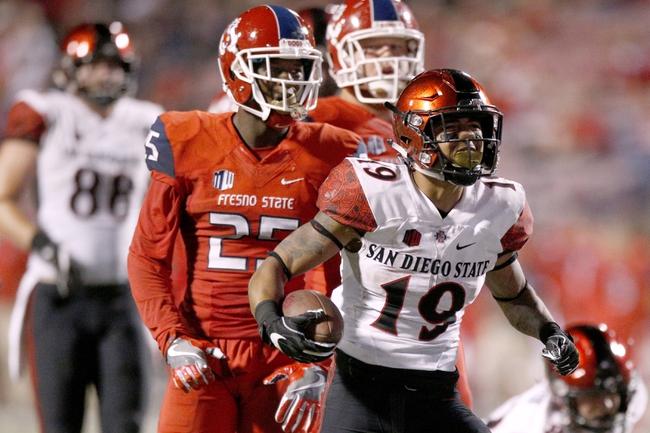 The San Jose State Spartans will travel to Qualcomm Stadium to take on the San Diego State Aztecs this Friday night in College Football action.

The San Diego State Aztecs won their 2nd straight game and improved 5-1 (2-0 MW) on the season after defeating the Fresno State Bulldogs, 17-3, this past Saturday. San Diego State was outstanding defensively in this one and had little trouble securing the victory after taking a 17-3 lead at the end of the 3rd quarter.  San Diego State outgained Fresno State by a 364-217 margin and won the turnover battle by a 3-0 margin. Leading the way for the Aztecs was Donnel Pumphrey who had 2 TD while gaining 220 rushing yards. On the season, the Aztecs have been led by RB Donnel Pumphrey who has 11 TD on the season while averaging 185.2 rushing yds/game on 27.8 att/game. Also in the backfield is Rashaad Penny who has chipped in 3 TD while averaging 57.8 rushing yds/game. QB Christian Chapman has completed 62.8% of his passes for 8 TD and 2 INT while averaging 164.0 passing yds/game. Mikah Holder (2.5 rec/g, 59.7 yds/g, 3 TD), Eric Judge (2.2 rec/g, 24.8 yds/g), Donnel Pumphrey (3.0 rec/g, 21.8 yds/g), and Rashaad Penny (1.0 rec/g, 19.5 yds/g, 3 TD) have been the leading receivers for the Aztecs. Defensively, San Diego State is holding their opponents to an average of 20.0 ppg on 297.2 total yards per game (199.2 passing, 98.0 rushing). San Diego State has forced 12 turnovers on the season and have an overall turnover margin of +6.

San Jose State got a strong defensive effort in their win against Nevada, however, the Spartans will need to continue to show improvement on the defensive end as San Jose State ranks 110th in scoring defense. San Diego State has held their last two opponents to just a combined 10 points and have the 27th ranked scoring defense in the country. The Aztecs have arguably the best RB in the country in Donnel Pumphrey and as the Spartans have the 113th ranked rushing defense, I think San Diego State will put up enough points in front of their home crowd to cover this large spread. Take San Diego State to cover.