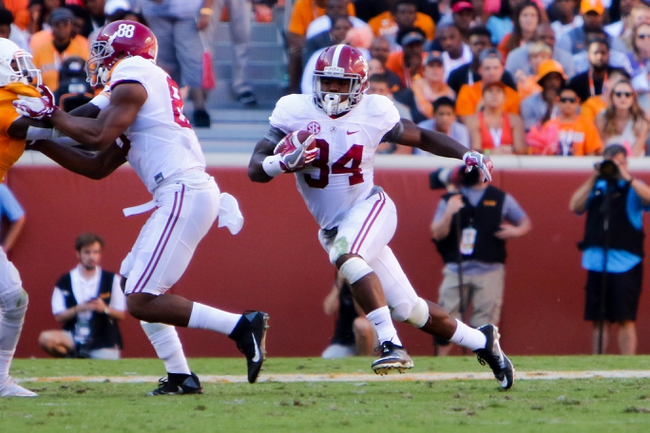 The Alabama Crimson Tide and the Texas A&M Aggies face off on Saturday in Tuscaloosa in a Week 8 college football battle of unbeaten top 10 ranked SEC teams.

The Alabama Crimson Tide have been dominating this season as they are 7-0 and ranked number 1 in the nation. The Alabama offense is averaging 45.4 points and 504.7 yards per game and they have turned the ball over 10 times. Crimson Tide QB Jalen Hurts has completed 63.5 percent of his passes with 9 touchdowns and 3 interceptions and he has rushed for 428 yards and 8 touchdowns. Damien Harris is Bama’s top rusher with 572 yards and a touchdown and Calvin Ridley has39 catches and 4 touchdowns and ArDarius Stewart has 26 catches and 3 receiving touchdowns. Defensively Alabama is allowing 15 points and 274 yards per game with 7 interceptions, 7 fumble recoveries, and 27 sacks. Reuben Foster is Alabama’s leading tackler with 41, Ryan Anderson has 8.5 sacks, and Tim Williams has 7.5 sacks. Alabama just looks to be getting better each week and they are riding the longest winning streak in the nation and their longest winning streak under head coach Nick Saban.

The Texas A&M Aggies are 6-0 this season and they are coming off of a bye last week. Texas A&M’s offense is averaging 40.2 points and 532.8 yards per game and they have turned the ball over 11 times. Aggies QB Trevor Knight has completed 53.5 percent of his passes with 9 touchdowns and 5 interceptions and he has rushed for 502 yards and 5 touchdowns. Trayveon Knight is the top rusher for Texas A&M with 704 yards and 5 touchdowns and Christian Kirk has 40 catches with 4 touchdowns and Josh Reynolds has 25 catches and 4 touchdowns. The Texas A&M defense is allowing 19.2 points and 437.5 yards per game with 7 interceptions, 10 fumble recoveries, and 20 sacks. Justin Evans is the Aggies top tackler with 48, Daeshon Hall has 9.0 sacks and Claude George and Myles Garrett each have 6 sacks as Garrett should be much healthier for this one than he has been in recent games. Texas A&M has been flying under the radar but we will see exactly where they stand in the big picture after this one.

This line seems way out of hand so I will take the points with Texas A&M. I see the Aggies being able to move the ball and play sound defense and I wouldn’t be at all shocked if this one is really tight at the end and I can see this being similar to Bama’s game against Ole Miss earlier this season.