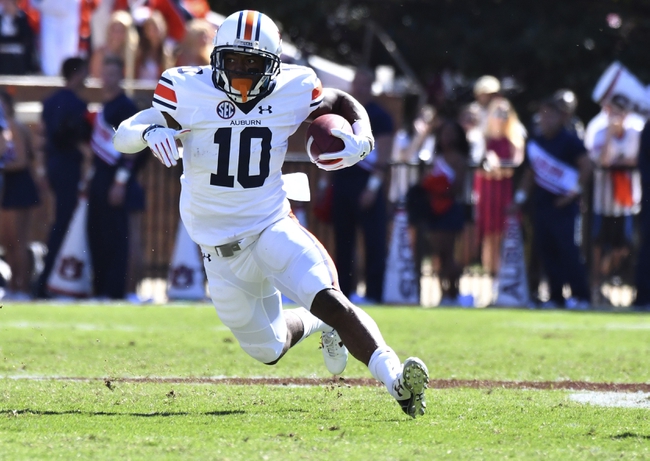 The Auburn Tigers and the Arkansas Razorbacks face off on Saturday in week 8 SEC college football action.

The Auburn Tigers are 4-2 this season and they are coming off of a bye week but they have won their last 3 games. The Auburn offense is averaging 32.3 points and 479.2 yards per game and they have turned the ball over 9 times. Tigers QB Sean White has completed 69.7 percent of his passes with 6 touchdowns and 2 interceptions and he has rushed for another touchdown. Kerryon Johnson leads the Auburn rushing attack with 538 yards and 6 touchdowns and Tony Stevens is the top receiver with 24 catches and 3 touchdowns and Ryan Davis has 19 catches and a touchdown. The Auburn defense is allowing 16 points and 346.8 yards per game with 3 interceptions, 5 fumble recoveries, and 14 sacks. Johnathan Ford leads the Tigers defense with 37 tackles, Tray Mathews and Tre’ Williams each have 26 tackles, and Carl Lawson has 6.0 sacks. Auburn appears to be a very good team but not a great one as both of their losses are to teams currently ranked in the top 10: Clemson and Texas A&M.

The Arkansas Razorbacks are 5-2 this season and they are coming off of a big win over Ole Miss. The Arkansas offense is averaging 34.9 points and 445.6 yards per game and they have turned the ball over 13 times. Razorbacks QB Austin Allen has completed 63 percent of his passes with 18 touchdowns and 6 interceptions but he lacks mobility and it has cost him. Rawleigh Williams is Arkansas’ top rusher with 785 yards and 5 touchdowns and Drew Morgan is the leading receiver with 37 catches and 2 touchdowns and Jared Cornelius has 22 catches and 4 touchdowns but Arkansas needs to find a way to get the ball more to Jeremy Sprinkle who has 19 catches and 4 touchdowns. The Razorbacks defense is allowing 27.9 points and 398.9 yards per game with 7 interceptions, 7 fumble recoveries, and 15 sacks. Brooks Ellis is Arkansas’ leading tackler with 51, Dre Greenlaw has 36 tackles but he is out, and Josh Liddell has 33 tackles. Last week’s win was huge for Arkansas but this is just their second true road game this season.

Auburn is the better team but this is way too many points in a game that figures to be physical. Both of these teams are battle tested so while I see Auburn getting the win, I see Arkansas keeping it close enough to cover the spread.