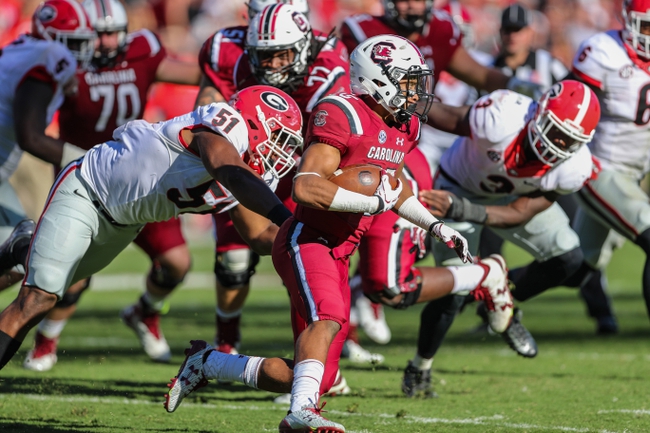 The South Carolina Gamecocks and the Massachusetts Minutemen face off on Saturday in Columbia in week 8 college football action.

The South Carolina Gamecocks are coming off of a bye week but they are 2-4 this season and have lost their last three games in a row. The South Carolina offense is averaging 14 points and 304.5 yards per game and they have turned the ball over 9 times. Gamecocks QB Brandon McIlwain has completed 52.8 percent of his passes with 2 touchdowns and 1 interception and he has rushed for 2 touchdowns but he has been sacked 16 times. A.J. Turner has been the workhorse in the South Carolina backfield rushing for 300 yards with 2 touchdowns and Hayden Hurst is the top receiver with 30 catches and Bryan Edwards has 20 receptions. The Gamecocks defense is allowing 20.2 points and 395.7 yards per game with 6 interceptions, 4 fumble recoveries, and 11 sacks. Bryson Allen-Williams leads the South Carolina defense with 37 tackles, T.J. Holloman has 35 tackles, and D.J. Smith has 34 tackles. South Carolina is clearly a team that is in rebuilding mode but they don’t appear close to being competitive in the SEC.

The UMass Minutemen have played a tough schedule but they haven’t done anything against it as they sit at 1-6 on the season. The Massachusetts offense is averaging 19.7 points and 318.7 yards per game and they have turned the ball over 13 times. Minutemen QB Andrew Ford has completed 63.6 percent of his passes with 13 touchdowns and 8 interceptions but he has been sacked 29 times. Marquis Young is the top rusher for UMass with 544 yards and 3 touchdowns and Adam Breneman is the top receiver with 35 catches and 2 touchdowns and Andy Isabella has 33 catches and 5 touchdowns. Defensively Massachusetts is allowing 33.3 points and 468.6 yards per game with 2 interceptions, 7 fumble recoveries, and 13 sacks. Steve Casali leads UMass with 63 tackles, Jesse Monteiro has 41 tackles, and Da’Sean Downey has 4 sacks. The UMass offense seems to be capable but the defense just doesn’t seem up to the task.

The total in South Carolina has come in under 3-0-1 against a team with a losing record, 10-1 after accumulating less than 100 rushing yards in their previous game, and 8-1-1 in their last 10 non-SEC games. UMass is 0-7 against the spread in October, 4-0 against the spread against the SEC, and the under is 4-0 following a bye week.

The spread here just looks to be big and South Carolina just doesn’t have a team that is going to blow teams out so I am going to take UMass with the generous points.