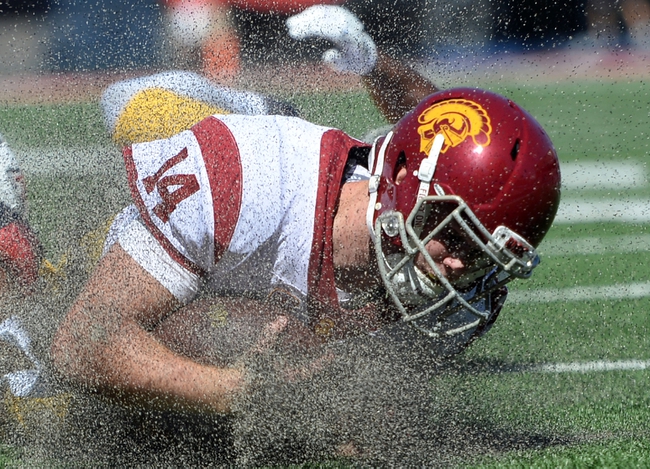 The Cal Golden Bears and USC Trojans square off in a key Pac-12 college football game Thursday night at the Los Angeles Memorial Coliseum on ESPN.

The USC Trojans look to build on their three-game winning streak and remain unbeaten at home. The USC Trojans have won six straight home games overall. Sam Darnold is completing 66.7 percent of his passes for 1,334 yards, 13 touchdowns and two interceptions. Darnold and Max Browne have combined for 15 touchdown passes this season. JuJu Smith-Schuster and Darreus Rogers have combined for 922 receiving yards and eight touchdowns while Deontay Burnett has 23 receptions. The USC Trojans ground game is averaging 177 yards per contest, and Justin Davis leads the way with 476 yards and two touchdowns. Defensively, USC is allowing 24 points and 370.7 yards per game. Cameron Smith leads the USC Trojans with 50 tackles, Porter Gustin has two sacks and Iman Marshall has two interceptions.

The last two meetings between Cal and USC were decided by eight or less points. USC is obviously the better team with a better defense, but the Cal Golden Bears are an offensive machine that's scored 41 or more points in eight of their last nine games. This is simply too many points to give a Cal offense that's going to move the football and find the end zone. The Golden Bears can't get stops, but history shows they're going to put points on the board.

I'll take Cal and the points.