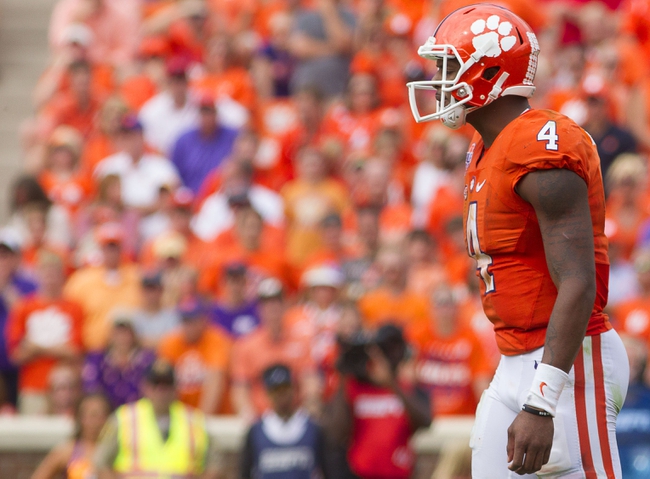 Coming up in Week 9 ACC college football action on Saturday, October 29 from Bobby Bowden Field at Doak Campbell Stadium in Tallahassee, the Clemson Tigers will be visiting the Florida State Seminoles.

Clemson has been rolling this year, and they’re sporting a 7-0 record after a 24-17 win over North Carolina State in their last outing. In that one, Tigers QB Deshaun Watson had a busy day with a 39-of-52 line for 378 yards, two touchdowns and a pick, while CJ Fuller led the running game on 16 carries for 56 yards. Clemson WR Mike Williams had a nice game through the air with 12 catches for 146 yards and a TD.

Over on the Florida State side, they’re coming in with a pretty good 5-2 record, with a 17-6 win over Wake Forest in their last outing. In that game, Seminoles QB Deondre Francois was 22-of-37 for 319 yards, one TD and one pick, with most of the work going to Travis Rudolph, who had 13 catches for a whopping 238 yards. Dalvin Cook had a nice day for Florida State on the ground with 25 carries for 115 yards.

On the season thus far, Francois is 138-of-221 for 1876 yards and a 10:3 TD:INT mark, while Cook leads Florida State in rushing with 159 carries for 900 yards and seven scores. Rudolph is way out front of the other Seminoles receivers with 32 catches for 497 yards and three touchdowns.

Clemson looked almost vulnerable in their last game, but they’ve still scored at least 24 points in their last six games straight. As for Florida State, they’ve scored a relatively tame 37 points combined in their last two games (both wins). The Seminoles don’t seem to fare all that well in higher-scoring games, which is what this should turn out to be. I like Clemson to turn up the offense here and dominate the scoreboard.