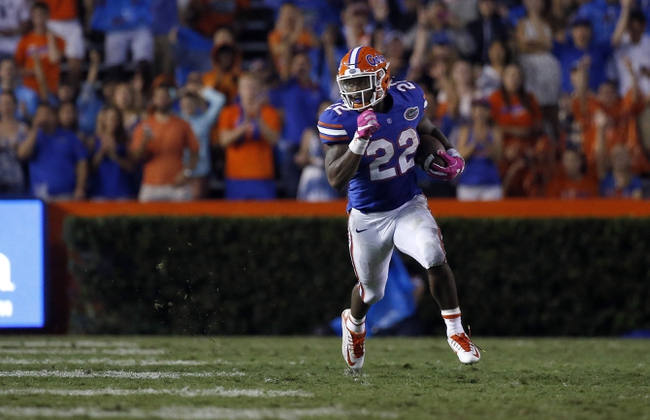 The Florida Gators are 5-1 this season and are coming off of a bye week is they had up to Jacksonville to face their rivals. The Florida offense is averaging 30.3 points and 426.5 yards per game and they have turned the ball over 9 times. Luke Del Rio is back at QB for the Gators and he has completed 57.6 percent of his passes with 7 touchdowns and 5 interceptions. Jordan Scarlett is UF’s top rusher with 375 yards and 5 touchdowns and DeAndre Goolsby is the top receiver with 25 catches and a touchdown and Antonio Callaway and Brandon Powell each have 23 receptions and 2 touchdowns. The Florida defense has been stingy allowing 12 points and 252.5 yards per game with 10 interceptions, 3 fumble recoveries, and 19 sacks. Jarrad Davis is the Gators top tackler with 48, Alex Anzalone has 40 tackles, and Marcus Maye has 35 tackles. Florida hasn’t been spectacular offensively but they are letting the defense set up the offense and so far, it is working.

The Georgia Bulldogs are 4-3 this season and are also coming off of a bye but they have lost 3 of their last 4 games. The Georgia offense is averaging 25.1 points and 402.9 yards per game and they have turned the ball over 10 times. Bulldogs QB Jacob Eason has completed 54.3 percent of his passes with 9 touchdowns and 5 interceptions and he is still in the learning process. Nick Chubb is Georgia’s top rusher with 586 yards and 5 touchdowns and UGA uses a slew of backs including Sony Michel and Brian Herrien while Isaiah McKenzie leads the team with 30 receptions and 5 touchdowns and Terry Goodwin has 16 catches. The Georgia defense is allowing 26.4 points and 339.7 yards per game with 8 interceptions, 7 fumble recoveries, and 14 sacks. Natrez Patrick is the Dawgs top tackler with 42, Roquan Smith has 39 tackles, and Lorenzo Carter has 4 sacks. The Georgia defense hasn’t been good enough and with Chubb over used in the early games he hasn’t been able to contribute enough to make Eason effective.

I am really down on Georgia and think the Kirby Smart hiring might have rung in several down years for this program and the early returns are showing his system for defense doesn’t work with the players he has and his offense isn’t enough to compensate for it. While Florida’s offense isn’t very good, their defense is exceptional and I can see that causing Georgia a lot of problems and I see the Gators controlling field position and getting the cover.