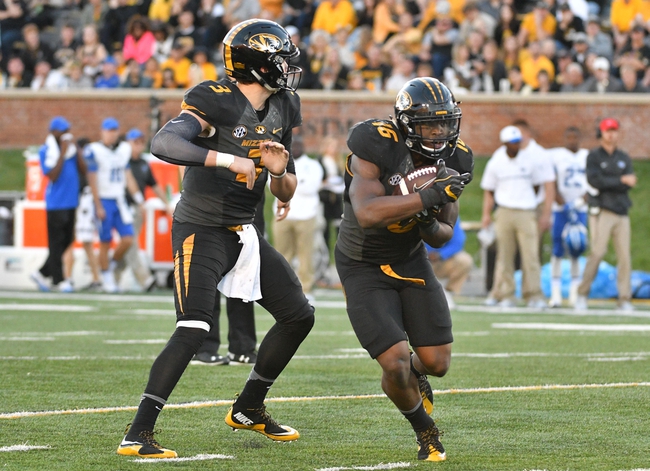 The Missouri Tigers and the Kentucky Wildcats face off on Saturday in week 9 SEC college football action.

The Missouri Tigers are coming off of a disappointing loss to Middle Tennessee State as they fell to 2-5 for the season. The Missouri offense is averaging 34.9 points and 505 yards per game but they have turned the ball over 14 times. Tigers QB Drew Lock has completed 53.3 percent of his passes with 16 touchdowns and 6 interceptions. Damarea Crockett is Mizzou’s top rusher with 546 yards and 7 touchdowns and Ish Witter has rushed for 460 yards and 3 touchdowns while J’Mon Moore is the top receiver with 30 catches and 6 touchdowns. The Missouri defense is allowing 29.7 points and 458.9 yards per game with 10 interceptions, 4 fumble recoveries, and 11 sacks. Michael Scherer leads Mizzou in tackles with 53, Donavin Newsom has 52 tackles, and Thomas Wilson has 49 tackles. Missouri is having a tough time of it in the post Gary Pinkel era.

The Kentucky Wildcats are 4-3 this season and are coming off of an exciting last second win over Missouri. The Kentucky offense is averaging 26.7 points and 374.7 yards per game and they have turned the ball over 18 times. UK QB Stephen Johnson has completed 56.1 percent of his passes with 5 touchdowns and 2 interceptions and he has rushed for a touchdown. Stanley Williams leads Kentucky in rushing with 639 yards and 2 touchdowns and Benny Snell has 469 yards and 6 touchdowns while Garrett Johnson is the top receiver with 22 catches and 2 touchdowns and Jeff Badet has 17 catches and 3 touchdowns. The Kentucky defense is allowing 32.3 points and 426.3 yards per game with 7 interceptions, 2 fumble recoveries, and 18 sacks. Jordan Jones is Kentucky’s top tackler with 67 tackles, Mike Edwards has 54 tackles, and Denzil Ware and Josh Allen each have 4.5 sacks. Kentucky is a team I had written off earlier but they seem to be improving each week.

I just like the way Kentucky has played recently and I don’t like the way Missouri has been playing and while I don’t know if the Cats are playing well enough to win outright, I think they can keep it close enough. Kentucky has learned to bounce back with quick scores and that should be more than good enough here. I see Kentucky winning outright but I will take the points for good measure.