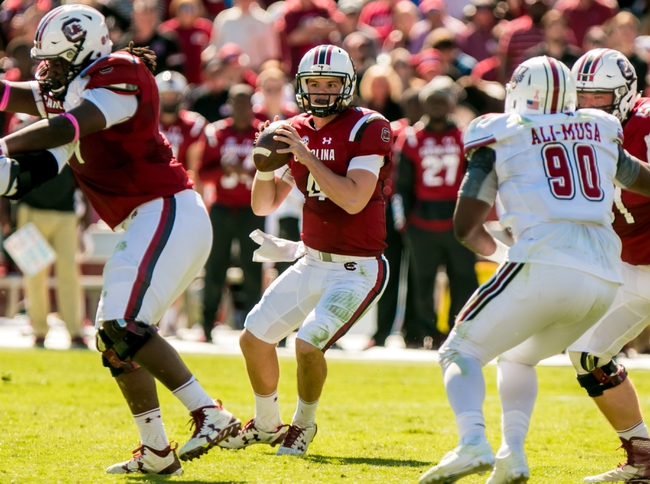 The South Carolina Gamecocks and the Tennessee Volunteers face off on Saturday in Columbia in week 9 SEC college football action.

The South Carolina Gamecocks are 3-4 this season and they are coming off of an out of conference win over UMass last Saturday. Overall the South Carolina offense just hasn’t been good enough averaging 16.9 points and 317.4 yards per game and they have turned the ball over 11 times. Gamecocks QB Brandon McIlwain has completed 52.8 percent of his passes with just 2 touchdowns and 1 interception and he has rushed for 2 touchdowns but he just hasn’t added any offensive firepower. A.J. Turner is South Carolina’s top rusher with 300 yards and 2 touchdowns and Hayden Hurst is the top receiver with 31 catches and Bryan Edwards has 23 catches. The Gamecocks defense is allowing 21.3 points and 394.7 yards per game with 8 interceptions, 6 fumble recoveries, and 12 sacks. Bryson Allen-Williams is South Carolina’s top tackler with 46, T.J. Smith has 46 tackles as well, T.J. Holloman has 41 tackles, and Darius English has 6 sacks. South Carolina has played tough at times but they don’t appear to have the talent on either side of the ball to compete with the best teams in the SEC.

The Tennessee Volunteers are 5-2 this season and coming off of a bye week but they have lost their last two games. The Volunteer offense is averaging 30.4 points and 393.6 yards per game and they have turned the ball over 17 times. Vols QB Joshua Dobbs has completed 58.5 percent of his passes with 14 touchdowns and 9 interceptions and he has rushed for 293 yards and 5 touchdowns. Jalen Hurd is Tennessee’s top rusher with 435 yards and 2 touchdowns while Alvin Kamara has rushed for 313 yards and 3 touchdowns and he has caught 22 passes with 2 touchdowns while Josh Malone is the top receiver with 22 catches and 5 touchdowns and Jauan Jennings has 20 catches and 3 touchdowns. Defensively the Volunteers are allowing 29.9 points and 427.1 yards per game with 6 interceptions, 9 fumble recoveries, and 11 sacks. Todd Kelly Jr. leads Tennessee with 50 tackles, Colton Jumper has 42 tackles, and Derek Bennett has 6 sacks. Tennessee has been in plenty of tight games this season and they haven’t laid down and quit against anyone.

Some would say Tennessee is fortunate for their record to be as good as it is while others would argue they should just have the one loss to Alabama but any way you slice it Tennessee games have been exciting to watch this season. This has been a down year for South Carolina but I expect them to fight hard here at home and keep it close.