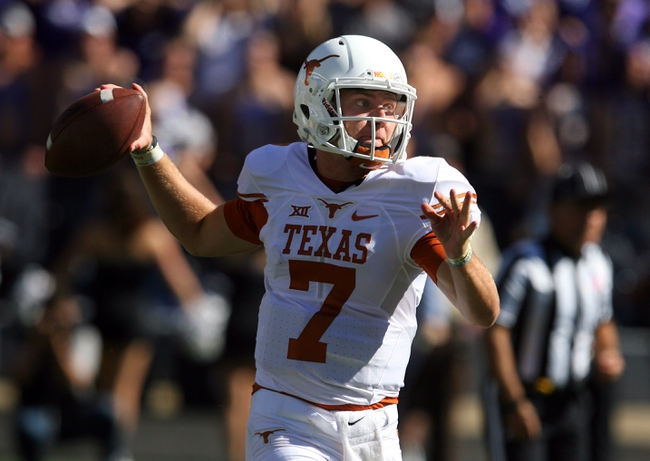 The Baylor Bears look to win their eighth straight game to remain in the college football playoff conversation. The Baylor Bears have won seven of their last eight road games overall. Seth Russell is completing 57.1 percent of his passes for 1,470 yards, 16 touchdowns and four interceptions. Russell has two or more touchdown passes in 10 of his last 11 games. KD Cannon and Chris Platt have combined for 705 receiving yards and eight touchdowns while Blake Lynch has 18 receptions. The Baylor Bears ground game is averaging 282.8 yards per contest, and Shock Linwood leads the way with 500 yards and two touchdowns. Defensively, Baylor is allowing 17.2 points and 320.3 yards per game. Taylor Young leads the Baylor Bears with 46 tackles, K.J. Smith has 2.5 sacks and Orion Stewart has four interceptions.

The Texas Longhorns could use a strong home victory in order to get back to a .500 record. The Texas Longhorns have won four games against ranked teams since the 2014 season. Shane Buechele is completing 64.5 percent of his passes for 1,722 yards, 15 touchdowns and five interceptions. Buechele has two or more touchdown passes in three straight games. Devin Duvernay and Dorian Leonard have combined for 506 receiving yards and six touchdowns while Jerrod Heard has 18 receptions. The Texas Longhorns ground game is averaging 222.1 yards per contest, and D’Onta Foreman leads the way with 855 yards and eight touchdowns. Defensively, Texas is allowing 32.6 points and 438.7 yards per game. Anthony Wheeler leads the Texas Longhorns with 51 tackles, Breckyn Hager has four sacks and Dylan Haines has two interceptions.

After beating Notre Dame in the opening week, everybody was eager to say the Texas Longhorns were back. Things have changed the last month or so. Texas continues to stink up the joint defensively and the Longhorns overall don't look as confident as they once did in Charlie Strong. The Baylor Bears are already a scoring machine and they should have little trouble against this Texas defense. Not to mention Baylor likely hasn't forgot about losing to Texas at home last season.

Look for Baylor to remain unbeaten and return the favor to the Texas Longhorns.