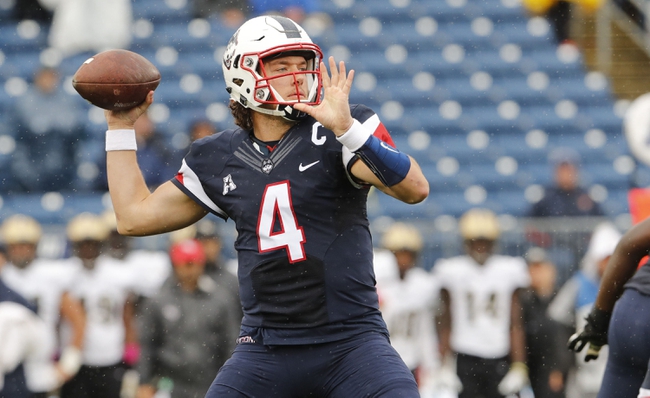 The Temple Owls and UConn Huskies square off in a AAC college football game Friday night at Rentschler Field on ESPN2.

The Temple Owls look to stay hot after winning five of their last six games and bud on their AAC East division lead. The Temple Owls have lost four of their last five road games. Phillip Walker is completing 57.6 percent of his passes for 1,990 yards, 13 touchdowns and 10 interceptions. Walker has two touchdown passes in four of his last six games. Keith Kirkwood and Ventell Bryant have combined for 832 receiving yards and five touchdowns while Jahad Thomas has 23 receptions. The Temple Owls ground game is averaging 181 yards per contest, and Ryquell Armstead leads the way with 674 yards and 11 touchdowns. Defensively, Temple is allowing 22.7 points and 306 yards per game. Stephaun Marshall leads the Temple Owls with 43 tackles, Haason Reddick has 7.5 sacks and Delvon Randall has three interceptions.

The UConn Huskies are desperate for a victory after losing five of their last six games. The UConn Huskies have to win out in order to become bowl eligible this season. Bryant Shirreffs is completing 58.7 percent of his passes for 2,010 yards, seven touchdowns and six interceptions. Shirreffs has one or less touchdown passes in 15 of his last 17 games. Noel Thomas, Jr. and Hergy Mayala have combined for 1,309 receiving yards and three touchdowns while Arkeel Newsome has 18 receptions. The UConn Huskies ground game is averaging 126.5 yards per contest, and Newsome leads the way with 528 yards and four touchdowns. Defensively, UConn is allowing 27.6 points and 415.6 yards per game. Obi Melifonwu leads the UConn Huskies with 74 tackles, Cole Ormsby has four sacks and Jhavon Williams has one interception.

UConn has had its struggles on the road, but the Huskies are very tough at home and all of their home games this season have resulted in wins or losses by one score. Temple has caught fire the last month or so, but the Owls still aren't the greatest team offensively and have a quarterback in Walker who can be turnover prone. This is going to be a defensive battle where the team that makes the fewest mistakes wins the game. I like having the Huskies at home and the 10 free points in my back pocket.