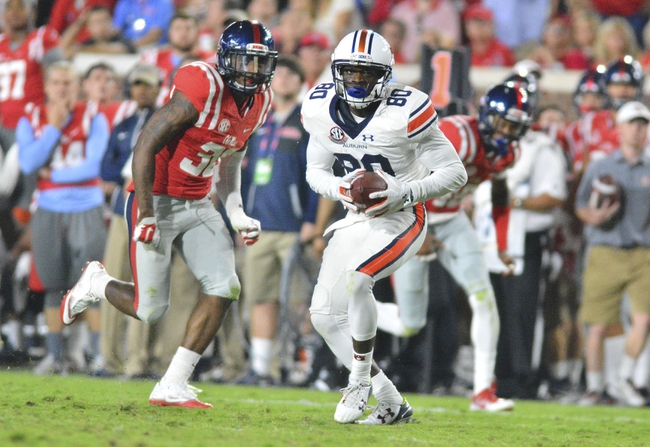 The Auburn Tigers and the Vanderbilt Commodores face off on Saturday in week 10 SEC college football action.

The Auburn Tigers are 6-2 this season and are winners of their last five games as they appear to be improving each week. The Auburn offense is rolling averaging 36.2 points and 507.6 yards per game while they have turned the ball over 9 times. Tigers QB Sean White has been effective completing 68.5 percent of his passes with 8 touchdowns and 2 interceptions. Kamryn Petteway leads the Auburn rushing attack with 933 yards and 7 touchdowns and Kerryon Johnson has 580 yards and 8 touchdowns while Tony Stevens has 24 receptions and 3 touchdowns and Ryan Davis has 22 catches. The Auburn defense is allowing 16 points and 358.2 yards per game with 5 interceptions, 6 fumble recoveries, and 20 sacks. Tray Mathews is the Tigers leading tackler with 50 tackles, Tre’ Williams has 49 tackles, and Carl Lawson has 7.5 sacks. Auburn appears to be hitting on all cylinders as their season ending game with Alabama looms in the background.

The Vanderbilt Commodores are 4-4 this season and are coming off of a bye week that followed a big win over Georgia. The Vandy offense is averaging 20.8 points and 308.6 yards per game and they have turned the ball over just 7 times. Commodores QB Kyle Shurmur has completed 53 percent of his passes with 4 touchdowns and 3 interceptions. Ralph Webb paces the Vanderbilt rushing attack with 855 yards and 6 touchdowns and C.J. Duncan is the top receiver with 21 receptions and Kalija Lipscomb has 20 catches and 2 touchdowns. The Vanderbilt defense is allowing 21.4 points and 398 yards per game with 5 interceptions, 8 fumble recoveries, and 9 sacks. Zach Cunningham is Vandy’s leading tackler with 85 tackles, Ryan White has 54 tackles, and LaDarius Wiley has 51 tackles. Vanderbilt is 2 wins away from being bowl eligible so every game is big for them at this point.

This is a really bug number and while I don’t see Vandy as being a threat to steal this one, I see it being closer than this big number. Vanderbilt has a way of making teams look bad and I see Auburn not looking their best here.