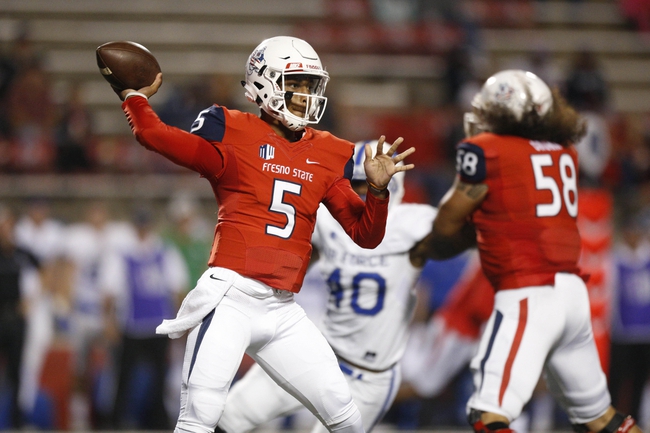 The Fresno State Bulldogs will travel to Hughes Stadium (CO) to take on the Colorado State Rams this Saturday afternoon in College Football action.

The Fresno State Bulldogs lost their 7th straight game and dropped to 1-8 (0-5 MW) on the season after being defeated by the Air Force Falcons, 31-21, this past Saturday. Fresno State played Air Force tough and actually entered the 4th quarter with a 21-17 lead, however, couldn’t secure the victory after allowing the Falcons to take the lead with just 2:34 left to play. Fresno State was outgained by Air Force by a 424-349 margin and lost the turnover battle by a 4-1 margin. Leading the way for the Bulldogs was WR KeeSean Johnson who had 3 TD’s and 142 yards on 10 receptions. On the season, Fresno State is averaging 20.6 ppg on 350.2 total yards per game (238.3 passing, 111.9 rushing). Offensviely, the Bulldogs are led by QB Chason Virgil who has completed 51.4% of his passes for 13 TD and 10 INT while averaging 223.7 passing yds/game. Virgil’s main targets for the Bulldogs has been KeeSean Johnson (6.7 rec/g, 73.2 yds/g, 6 TD), Jamire Jordan (4.3 rec/g, 70.7 yds/g, 2 TD), and Aaron Peck (4.4 rec/g, 65.9 yds/g, 3 TD). Dontel James has been the main weapon in the Bulldogs backfield as he has 4 TD’s on the season while averaging 67.3 rushing yds/game. Defensively, Fresno State is allowing their opponents to average 33.8 ppg on 431 total yards per game (159.3 passing, 271.7 rushing). Fresno State has committed 16 turnovers on the season and has an overall turnover margin of -10.

Fresno State has had a tough year however, there was some reason for optimism as the Bulldogs played tough in their 1st game under head-coach Eric Kiesau who replaced Tim DeRuyter who was let go after the Bulldogs 1-6 start. Colorado State has played better as of late however, will need to get some more production out of QB Nick Stevens as the Rams have just the 80th ranked passing offense in the country. Playing at Colorado State will be a challenge, but as I think Chason Virgil will be able to do some damage against the Rams 68th ranked passing defense, I think the Bulldogs can do enough to cover with the points as long as they limit their turnovers. I’m taking Fresno State and the points.