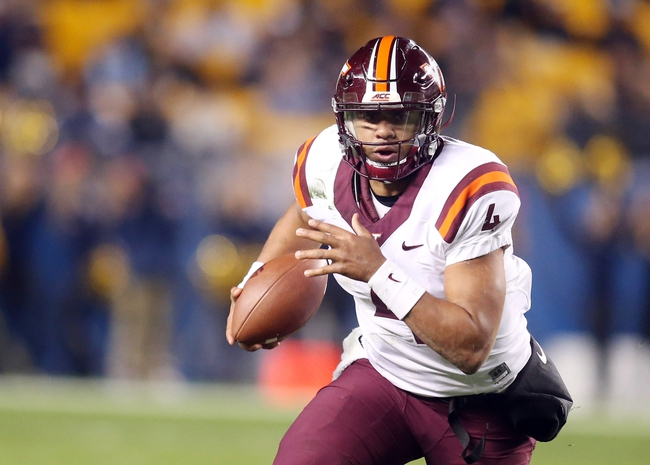 In Week 10 college football action on Saturday, November 5 from Brooks Field at Wallace Wade Stadium, we’ve got a great ACC matchup as the Virginia Tech Hokies take on the Duke Blue Devils.

Virginia Tech comes into this game with a solid 6-2 record on the season following a close 39-36 win over Pittsburgh in their last outing. In that game, Hokies QB Jerod Evans overcame an ankle injury to toss for a career-high 406 yards and two touchdowns, and Joey Slye tied school and ACC records with six made field goals. Bucky Hodges (six receptions; 145 yards) and Isaiah Ford (10 receptions; 143 yards; TD) led Virginia Tech in receiving.

On the season so far, Evans is 141-of-226 for 2017 yards and 21 touchdowns, while Travon McMillian leads the Hokies in rushing with 98 carries for 455 yards and three scores. Ford is tops in the Virginia Tech receiving game on his 46 receptions for 648 yards and six touchdowns.

Over on the Duke side, they’re entering this week’s game with a 3-5 record, and are skidding after a 38-35 loss to Georgia Tech in their last outing. In that one, Duke allowed a combined 459 rushing and passing yards to Justin Thomas, despite nearly overcoming a three-score deficit. Blue Devils QB Daniel Jones went 22-of-36 for 305 yards and two touchdowns, while Shaun Wilson led the way on the ground with 10 carries for 109 yards and a TD. Daniel Helm had a great day for Duek through the air with six catches for 72 yards and two touchdowns.

Not including a 17-point effort against Syracuse, Virginia Tech has logged at least 34 points in their last five games. Pittsburgh got the best of the Hokies defense, but they had previously allowed 17 or fewer points in four of five games. The Blue Devils, on the other hand, are skidding on offense with 20 or fewer points in three of their last four. Virginia Tech shouldn’t have too much trouble putting Duke away here, so I’ll stick with the Hokies.