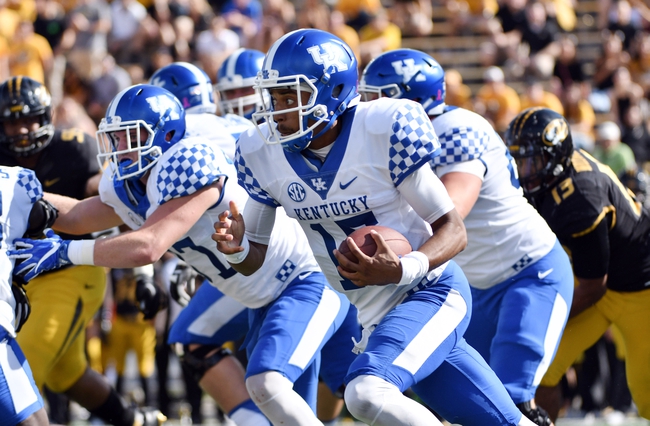 The Kentucky Wildcats and the Georgia Bulldogs face off on Saturday in week 10 SEC college football action.

The Kentucky Wildcats are 5-3 this season and they have won 5 of their last 6 games in one of the biggest turnaround stories this season in college football. The Kentucky offense is averaging 27.8 points and 400.6 yards per game and they have turned the ball over 20 times. UK QB Stephen Johnson has completed 56.8 percent of his passes with 7 touchdowns and 3 interceptions and he has rushed for a touchdown. Stanley “Boom” Williams leads Kentucky in rushing with 821 yards and 3 touchdowns and Benny Snell has rushed for 661 yards and 8 touchdowns while Garrett Johnson leads in receptions with 25 and 2 touchdowns and Jeff Badet has 20 catches and 4 touchdowns. The Kentucky defense is allowing 30.9 points and 421.2 yards per game with 7 interceptions, 2 fumble recoveries, and 15 sacks. Jordan Jones leads the Cats with 71 tackles, Mike Edwards has 60 tackles, and Josh Allen has 5.5 sacks. Kentucky’s defense has stepped it up and they have been completed passes that they weren’t able to complete earlier this season.

The Georgia Bulldogs are free falling as they sit at 4-4 this season losers of 4 of their last 5 games. The Georgia offense is averaging 23.2 points and 373 yards per game and they have turned the ball over 10 times. Bulldog QB Jacob Eason has completed 53.1 percent of his passes with 10 touchdowns and 5 interceptions but with the opposition shutting down the running game he has looked uncomfortable in the pocket. Nick Chubb is Georgia’s top rusher with 606 yards and 5 touchdowns but he was over used in the first game and hasn’t been the same since and Isaiah McKenzie is the top receiver with 30 catches and 5 touchdowns and Terry Goodwin has 21 catches. The Georgia defense has been hung out to dry allowing 26.1 points and 326.1 yards per game with 9 interceptions, 7 fumble recoveries, and 17 sacks. Natrez Patrick is the Dawgs top tackler with 49 tackles, Roquan Smith has 48 tackles, and Trenton Thompson has 35 tackles. Since the schedule has turned to conference play Georgia has looked very much like a team with a first year Head Coach and a freshman QB.

This is a game where public perception is just way off because of the school reputation in football and looks like a good spot to exploit that. Kentucky is the better coached team and are a home dog which makes them an easy choice here.