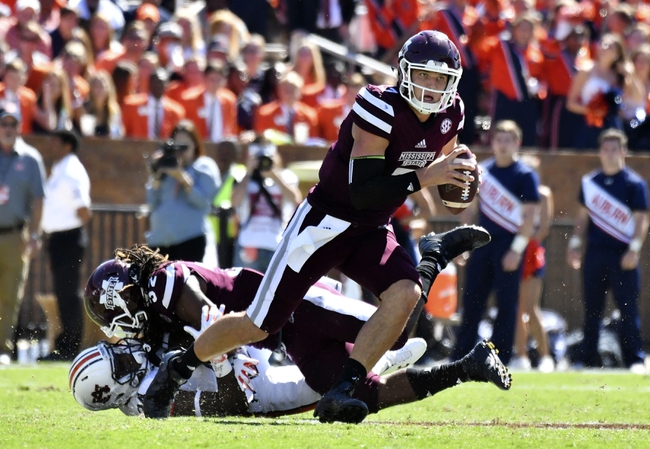 The Mississippi State Bulldogs and the Texas A&M Aggies face off on Saturday in week 10 SEC college football action.

The Mississippi State Rebels are 3-5 this season with their last two wins coming against soft out-of-conference opponents. The MSU offense is averaging 30.4 points and 430.1 yards per game and they have turned the ball over 12 times. Bulldogs QB Nick Fitzgerald has completed 56.1 percent of his passes with 14 touchdowns and 7 interceptions and he has rushed for 657 yards and 6 touchdowns. Ashton Shumpert is Mississippi State’s top option in the backfield with 231 yards and a touchdown and Fred Ross is the top receiver with 48 catches and 7 touchdowns. Defensively Mississippi State is allowing 30 points and 418.6 yards per game with 9 interceptions, 6 fumble recoveries, and 17 sacks. Richie Brown leads the MSU defense with 68 tackles, Leo Lewis has 56 tackles, and J.T. Gray has 51 tackles. Mississippi State is in a rebuilding year but even so this just isn’t a very good team.

The Texas A&M Aggies are 7-1 this season and they are hoping if they can win out they can land a spot in College Football Playoff though they will need some help for that to happen. The Texas A&M offense is averaging 38.4 points and 498.8 yards and they have turned the ball over 14 times. Aggies QB Trevor Knight has completed 53.3percent of his passes with 13 touchdowns and 6 interceptions and he has rushed for 529 yards and 9 touchdowns. Trayveon Williams leads Texas A&M in rushing with 776 yards and 6 touchdowns while Christian Kirk has 54 catches and 6 touchdowns and Josh Reynolds has 30 catches and 6 touchdowns. The Texas A&M defense is allowing 19.8 points and 424 yards with 9 interceptions, 10 fumble recoveries, and 26 sacks. Shaan Washington leads the Aggies defense with 57 tackles, Justin Evans has 55 tackles, and Armani Watts and Nick Harvey have 44 tackles each. Texas A&M has a roster loaded with talent and have proved they can play with anyone.

Several of Texas A&M’s key players didn’t play much or at all last week and they should be ready to go once again here. I believe this is Munson’s worst team he has had at MSU and look for the Aggies to drill the Bulldogs here.