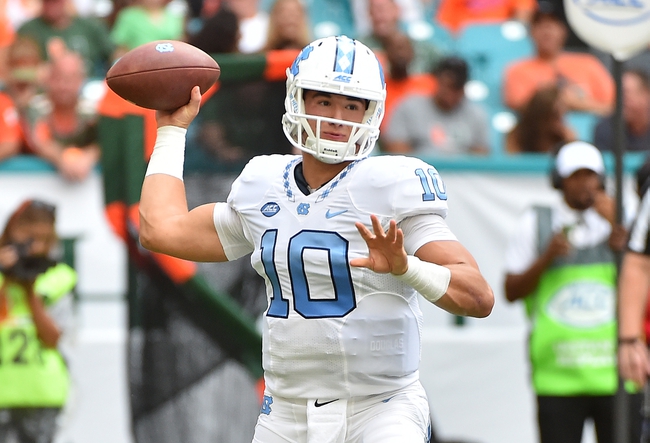 On Saturday, November 5 from Kenan Memorial Stadium in Chapel Hill, the Georgia Tech Yellow Jackets will be taking on the North Carolina Tar Heels in Week 10 ACC college football action.

Georgia Tech enters play here with a 5-3 record, thanks to a close 38-35 win over Duke this past Saturday. In that game, Jackets QB Justin Thomas had a career outing with a combined 459 yards and four touchdowns, 195 of the yards coming on 17 carries. Clinton Lynch was the high man in the receiving game for Georgia Tech with three grabs for 91 yards and two scores.

On the season so far for the Yellow Jackets, Thomas is 58-of-105 for 1024 yards and six touchdowns, while also leading the team in rushing with 97 carries, 479 yards and five scores. Ricky Jeune is Georgia Tech’s leading receiver with 19 catches for 312 yards and a TD this season.

As for North Carolina, they’re coming in at 6-2 following a solid 35-14 conference victory over Virginia in their last appearance. In that game, North Carolina QB Mitch Trubisky went 24-of-31 for 310 yards and three touchdowns in a great performance, while Elijah Hood posted 16 carries for 107 yards and a TD. Bug Howard also had a nice game for the Tar Heels with seven receptions for 109 yards and a TD.

On the year thus far, Trubisky sits on a 203-of-285 mark for 2378 yards and 18 touchdowns for North Carolina, and Hood is tops in the rushing game with 476 yards and five touchdowns on 96 carries. Ryan Switzer is the Tar Heels’ lead receiver with 66 catches for 678 yards and three scores.

On the whole, Georgia Tech’s offense has been pretty good at putting up points. The Yellow Jackets have at least 34 points in their last three outings, and at least 21 in six of their last seven. As for North Carolina, they had just 23 points in their two games heading into the Virginia matchup (where they admittedly looked way better). That said, I feel like the Tar Heels’ offense is much deeper than the Yellow Jackets’ squad, and North Carolina should be able to cover here without too much trouble.

The pick in this article is the opinion of the writer, not a Sports Chat Place site consensus.
Previous Pick
Illinois vs. Michigan State - 11/5/16 College Football Pick, Odds, and Prediction
Next Pick
Free College Football Picks, Odds, Schedule, and TV Info For All Week 10 2016 Games