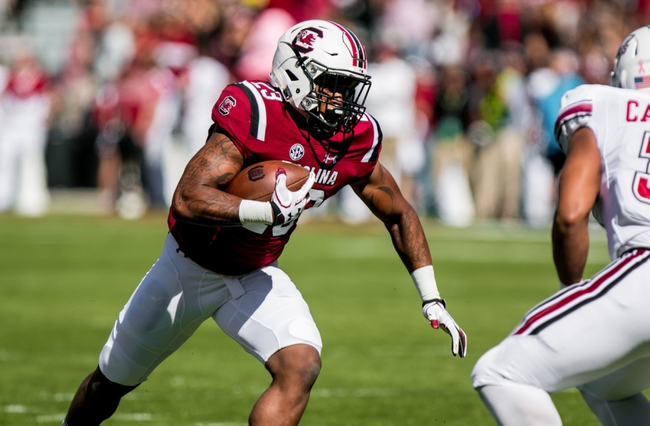 The South Carolina Gamecocks and the Missouri Tigers face off on Saturday in week 10 SEC college football action.

The South Carolina Gamecocks are 4-4 this season and they are coming off of their biggest win of the year beating Tennessee. The South Carolina offense is averaging 17.8 points and 318.4 yards per game and they have turned the ball over 11 times. Gamecocks QB Brandon McIlwain has completed 52.3 percent of his passes with 2 touchdowns and 1 interception and he has rushed for 2 touchdowns. Rico Dowdle is the top option in the South Carolina backfield rushing for 291 yards and 3 touchdowns and Hayden Hurst has 32 receptions and Bryan Edwards has 27 catches and 2 touchdowns. The Gamecocks defense is allowing 21.2 points and 382.5 yards per game with 10 interceptions, 7 fumble recoveries, and 14 sacks. D.J. Smith leads the South Carolina defense with50 tackles, Bryson Allen-Williams has 48 tackles, and Darius English has 6.5 sacks. South Carolina has a chance to make it to 6 wins and become bowl eligible and a win here would go a long towards making that happen.

The Missouri Tigers are 2-6 this season and they have lost their last four games in a row. The Missouri offense is averaging 33.1 points and 490.1 yards per game and they have turned the ball over 14 times. Mizzou QB Drew Lock has completed 53.8 percent of his passes with 18 touchdowns and 8 interceptions and he has rushed for 139 yards. Damarea Crockett is Missouri’s top rusher with 601 yards and 7 touchdowns and J’Mon Moore has 33 catches and 6 touchdowns and Dimetrios Mason has 26 receptions. The Missouri defense is allowing 30.4 points and 475.6 yards per game with 11 interceptions, 5 fumble recoveries, and 11 sacks. Donavin Newsom leads the Tigers defense with 55 tackles, Michael Scherer has 53 tackles, and Thomas Wilson has 50 tackles. Missouri has taken a big step backwards this season, their first without former Head Coach Gary Pinkel.

This isn’t a very good Missouri team but South Carolina hasn’t showed any kind of consistency so laying a touchdown seems to be a little on the high side. I see South Carolina winning in the fashion they generally win by, squeezing out a nail-biting win, but I don’t see them covering the spread.