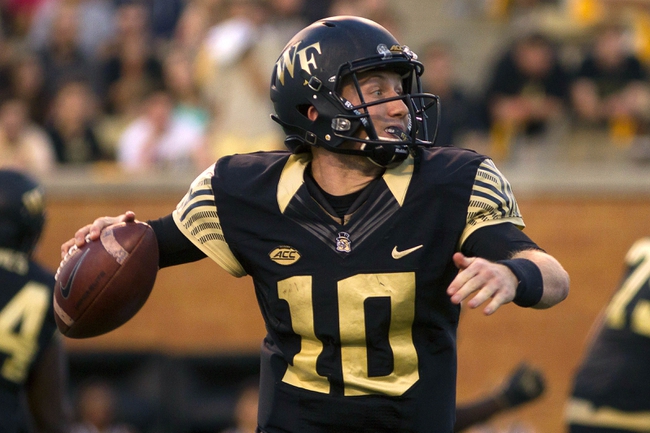 On Saturday, November 5 from BB&T Field in Winston-Salem, we’ve got a nice-looking ACC Week 10 college football matchup looming between the Virginia Cavaliers and the Wake Forest Demon Deacons.

Virginia has had a rough year, coming into this one 2-6 on the season following a 32-25 loss to Louisville in their last outing. In that game, Virginia had a slim 25-24 lead with two minutes to play, but gave up a 75-yard drive and the game-winning TD. Cavaliers QB Kurt Benkert went 25-of-39 for 238 yards, three touchdowns and two picks for Virginia, while Taquan MIzzell was the leading rusher with 20 carries and 66 yards. Doni Dowling was the Cavaliers’ lead receiver with five catches for 70 yards and two touchdowns.

So far this year, Benkert has a 183-of-314 line for 2097 yards and a 17:9 TD:INT ratio, while Mizzell leads the Cavaliers in rushing on 103 carries for 527 yards and four scores. Olamide Zaccheaus holds 35 receptions for 453 yards and six touchdowns to lead Virginia through the air.

Over on the Wake Forest side, they’re entering play here with a 5-3 mark on the year, dropping their last two games—most recently a 21-13 defeat at the hands of Army this past Saturday. In that one, Wake Forest QB John Wolford went 23-of-43 for 220 yards, one touchdown and three interceptions, while also leading the team in rushing with 10 carries for 66 yards. Tabari Hines had a pretty solid game, however, with seven receptions for 79 yards and a TD.

On the season for the Demon Deacons, Wolford is 118-of-215 for 1230 yards and a 4:7 TD:INT ratio, while Matt Colburn leads the team in rushing with 98 carries for 417 yards and one score. Hines is Wake Forest’s lead receiver on 28 receptions for 347 yards and two touchdowns.

Both of these teams are in dire straits at the moment; Virginia has lost three straight, and Wake Forest has dropped three of their last four. In that span, Wake Forest has scored 17 points or fewer in their three losses, but Virginia has put up a total of 77 points in their three losses. As such, there’s not much to like about the Wake Forest offense, but Virginia seems able to at least hang around with tougher competition. I’ll take the Cavaliers to clear this one relatively easily.