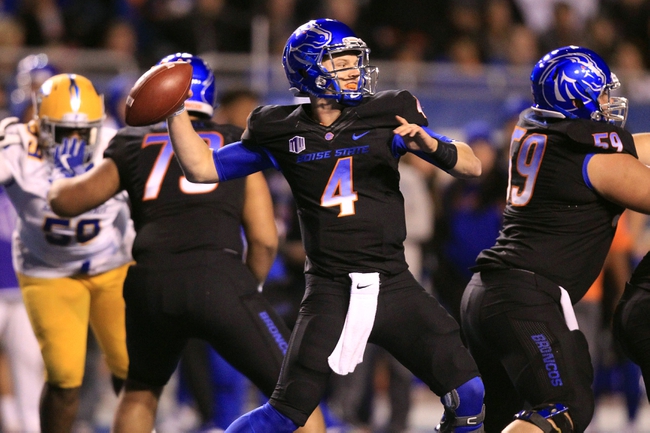 The 24th ranked Boise State Broncos will travel to Aloha Stadium to take on the Hawai’i Rainbow Warriors this Saturday night in College Football action.

The 24th ranked Boise State Broncos improved to 8-1 (4-1 MW) on the season after they were able to hold off the San Jose State Spartans, 45-31, this past Saturday. Boise St struggled slowing down the San Jose State offense, however, was able to pull away from the Spartans after an early 4th quarter TD made the score 38-16. Boise State outgained San Jose State by a 517-495 margin and won the turnover battle by a 1-0 margin. Leading the way for the Broncos was RB Jeremy McNichols who had 2 TD and 158 rushing yards on 28 carries. On the season, Boise State is averaging 34.8 ppg on 486.1 total yards per game (310.1 passing, 176.0 rushing). Offensively, the Broncos are led by RB Jeremy McNichols who has 16 rushing TD’s on the season and is averaging 135.11 rushing yds/game. McNichols is also a threat in the passing game out of the backfield as he has 4 receiving TD’s and averages 44.3 yds/game on 3.1 rec/game. QB Brett Rypien has completed 63.6% of his passes for 18 TD and 6 INT while averaging 286.4 passing yds/game. WR Thomas Sperbeck (6.3 rec/g, 101.0 yds/game, 7 TD) and Cedrick Wilson (4.1 rec/g, 76.2 yds/g, 8 TD) have been the biggest threats at the receiver position for Boise State. Defensively, Boise State is holding their opponents to an average of 22.7 ppg on 392.4 total yards per game (234.6 passing, 157.9 rushing). Boise State has only forced 5 turnovers on the season and has an overall turnover margin of -8.

Boise State continues to pick up wins however, the Broncos haven’t been able to dominate as much as expected as their defense has struggled as of late allowing their last 3 opponents (BYU, Wyoming, and SJSU) to average 29.3 ppg. Hawai’i got steamrolled by SDSU and will continue to have trouble picking up wins if they their defense, which ranks 119th in scoring defense and 107th in total defense, doesn’t find a way to improve. Boise State should be able to put up plenty of points in this one and although I do expect Hawaii to be able to score a TD or two in this one, I think the Broncos will be able to pull away and cover this large spread. Take Boise State to cover.