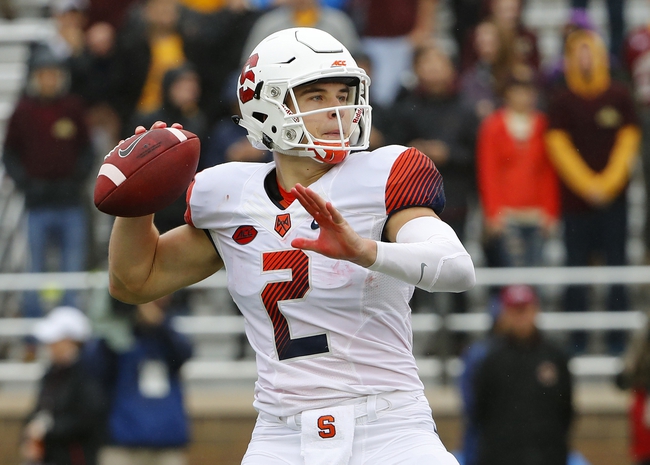 Headed our way in Week 11 ACC college football action on Saturday, November 12 from the Carrier Dome, we’ve got an interesting matchup between the North Carolina State Wolfpack and the Syracuse Orange.

North Carolina State comes into this game with a 4-5 record on the year, fresh off a 24-20 loss to Florida State this past Saturday. In that game, NC State QB Ryan Finley put up a 25-of-41 line for 304 yards, a TD and a pick, while Matthew Dayes had a solid day on the ground with 23 carries for 104 yards. Nyheim Hines led the Wolfpack in receiving with 11 catches for 124 yards.

Meanwhile on the Syracuse side, they’re entering play here with a 4-5 record on the season and were destroyed by Clemson 54-0 this past Saturday. In that game, Syracuse QB Austin Wilson went 17-of-27 for 116 yards but had two interceptions. Moe Neal was the Orange’s lead rusher with seven attempts for 64 yards, and Amba Etta-Tawo finished with nine catches for 84 yards to lead the receivers.

So far this season, Eric Dungey is still the top thrower for the Orange, with a 230-of-355 line for 2679 yards and a 15:7 TD:INT mark, while Dontae Strickland is tops in the rush with 120 carries for 456 yards and two touchdowns. Etta-Tawo leads Syracuse in receiving by a wide margin on 75 receptions, 1158 yards and seven touchdowns.

Honestly, there’s not a whole lot to like here if you’re not a fan of either team. North Carolina State has lost four in a row, but has kept it to within seven points or fewer in three of those. As for Syracuse, they’ve lost three of their last five, and have allowed at least 20 points in four of those games. I’m not totally enamored with the NC State offense, but Syracuse doesn’t have much going there either besides Etta-Tawo. I’ll take the Wolfpack to cover, with both teams finishing with points in the 20s.