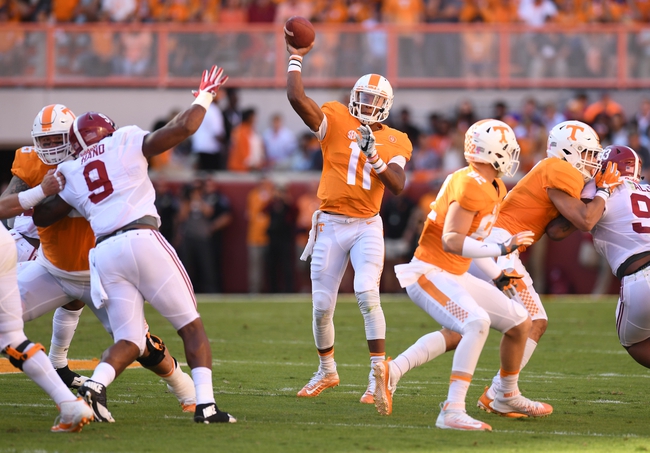 The Tennessee Volunteers and the Kentucky Wildcats face off on Saturday in Knoxville in week 1 SEC college football action.

The Tennessee Volunteers are 6-3 this season and they are coming off of a win over FCS Tennessee Tech that ended a 3 game losing streak. The Tennessee offense is averaging 32.1 points and 391.4 yards per game and they have turned the ball over 20 times. Vols QB Joshua Dobbs has completed 58.9 percent of his passes with 18 touchdowns and 11 interceptions and he has rushed for 323 yards and 5 touchdowns. With Jalen Hurd transferring Alvin Kamara takes over the rushing attack and he averages 4.9 yards per carry with 3 touchdowns and he has 22 catches and 3 receiving touchdowns while Josh Malone is the leading receiver with 31 catches and 7 touchdowns and Jauan Jennings has 25 catches and 5 touchdowns. The Tennessee defense is allowing 25.9 points and 393.2 yards per game with 7 interceptions, 9 fumble recoveries, and 20 sacks. Todd Kelly Jr. leads the Volunteer defense with 60 tackles, Emmanuel Moseley has 50 tackles, and Derek Barnett has 9 sacks. Tennessee has run hot and cold in almost all of their big games this season needing big comebacks to win or falling short in their losses.

The Kentucky Wildcats are 5-4 this season and they are coming off of a loss to Georgia that ended a 3 game winning streak. The Kentucky offense is averaging 27.3 points and 390.3 yards per game and they have turned the ball over 22 times. UK QB Stephen Johnson has completed 56 percent of his passes with 7 touchdowns and 4 interceptions. Stanley Williams leads Kentucky in rushing with 898 yards and 4 touchdowns and Benny Snell has rushed for 775 yards and 10 touchdowns and Garrett Johnson is the top receiver with 27 catches and 2 touchdowns and Jeff Badet has 22 receptions and 4 touchdowns. The Kentucky defense is allowing 30.4 points and 425.6 yards per game with 7 interceptions, 5 fumble recoveries, and 15 sacks. Jordan Jones is the Cats leading tackler with 81 tackles, Mike Edwards has 73 tackles, and Josh Allen has 5.5 sacks. Kentucky has every chance to win last week against Georgia and they couldn’t get it done and in the end it leaves them one win short of a bowl bid.

Tennessee comes from behind and squeaks out wins so even with a Vols win they would be hard pressed to cover a double digit spread against a team that can put point up. I like the way UK is playing and while I don’t know if they can win outright they should be good with this number of points.