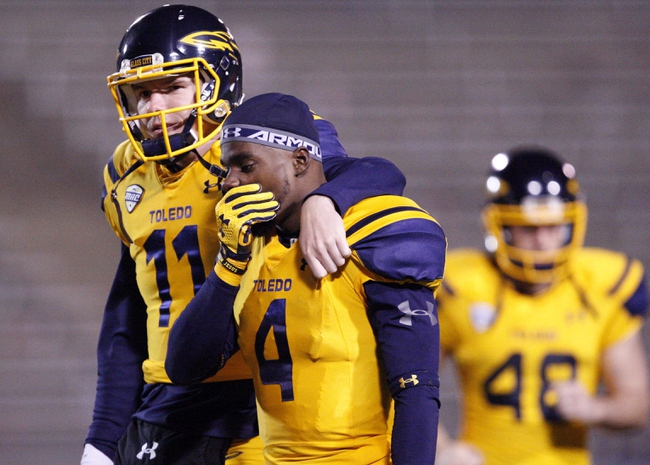 The Ball State Cardinals and Toledo Rockets meet Wednesday night in a MAC college football game at the Glass Bowl on ESPN2.

The Toledo Rockets look for their third straight victory to remain in the MAC West division race. The Toledo Rockets have have won eight of their last 11 home games. Logan Woodside is completing 70.8 percent of his passes for 3,328 yards, 37 touchdowns and six interceptions. Woodside has three or more touchdown passes in 10 straight games. Cody Thompson and Jon'Vea Johnson have combined for 1,721 receiving yards and 18 touchdowns while Corey Jones has 53 receptions. The Toledo Rockets ground game is averaging 200.2 yards per contest, and Kareem Hunt leads the way with 1,048 yards and seven touchdowns. Defensively, Toledo is allowing 22.9 points and 390.1 yards per game. DeJuan Rogers leads the Toledo Rockets with 61 tackles, Treyvon Hester has five sacks and Connery Swift has two interceptions.

This is a lot of points to give up consdering the last four games between Ball State and Toledo have been decided by 14 or less points. Yes, Toledo is the better team and it is senior night which is going to mean a ton to a team full of seniors. However, let's not act like Ball State is horrible. The Ball State Cardinals have had five of their six losses decided by 10 or less points. Ball State competes. Given the history between these teams and the fact the Ball State Cardinals are being overlooked with this line, I'm siding with the road team and the truckload of points.