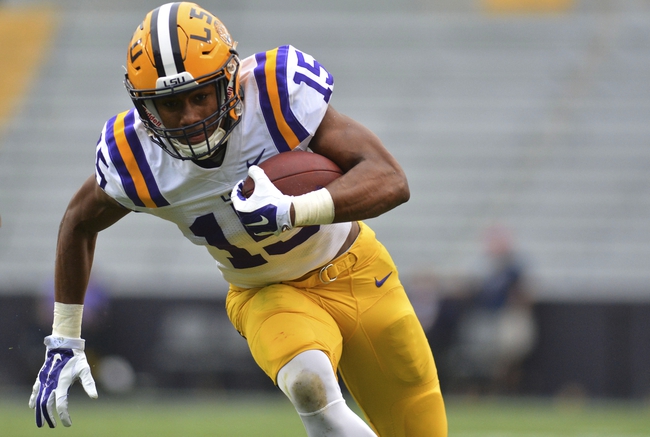 The LSU Tigers and the Florida Gators face off on Saturday in Baton Rouge in a week 12 SEC make-up game for a game that was previously scheduled in The Swamp but was cancelled due to Hurricane Matthew.

The LSU Tigers are 6-3 this season and they have won 4 of their last 5 games. The LSU offense is averaging 27.4 points and 404.2 yards per game and they have turned the ball over 14 times. Tigers QB Danny Etling has completed 58.8 percent of his passes with 7 touchdowns and 4 interceptions since taking over the starting job. Derrius Guice is LSU’s top rusher with 881 yards and 9 touchdowns and Leonard Fournette has rushed for 803 yards and 7 touchdowns in an injury plagued season while Malachi Dupre and Travin Dural each have 28 receptions. The LSU defense has been tough allowing 13.9 points and 312.3 yards per game with 9 interceptions, 6 fumble recoveries, and 24 sacks. Kendell Beckwith leads the Tigers in tackles with 90, Duke Riley has 73 tackles, and Arden key has 9 sacks. LSU is playing their best football of the season and it should land them in a nice bowl game but a win here would help their placement.

The Florida Gators are 7-2 this season and they have won 4 of their last 5 games. The Florida offense is averaging 26.2 points and 378.1 yards per game and they have turned the ball over 15 times. With Gators QB Luke Del Rio hurting it looks like it will once again be Austin Appleby who has completed 65.6 percent of his passes with 5 touchdowns and 2 interceptions. Jordan Scarlett is Florida’s top rusher with 617 yards and 6 touchdowns and Antonio Callaway is the top receiver with 35 receptions and 2 touchdowns and Brandon Powell has 30 catches and 2 touchdowns. The UF defense is allowing 13.3 points and 266.8 yards per game with 12 interceptions, 4 fumble recoveries, and 27 sacks. Jarrad Davis is Florida’s top tackler with 56 tackles, Alex Anzalone has 53 tackles, and Jalen Tabor has 4 interceptions. Missing Del Rio under center isn’t all that bad for the Gators as he is far from spectacular and they are a defense first team.

I expect this to be a hard hitting game where the defenses rule the day so points will be tough to come by so getting nearly 2 touchdowns before the game even starts is too good to pass up.